For the third year in row, a group of us gathered at the range the morning after Christmas for a bit of shooting fun. We had a smaller crowd than in years past; just two friends, my son and myself. (The rest of you missed a good time.) 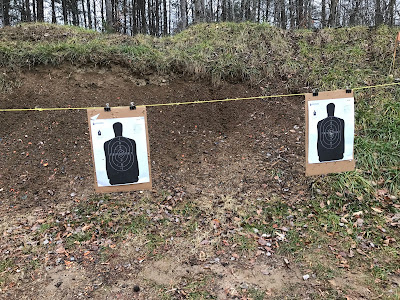 I packed three different pistols that my son and I took turns shooting. He's been mostly a rifle shooter, but now that he's approaching the age when he can buy a handgun, it's a becoming a more pertinent topic. I suspect before long he'll be outshooting me with the pistol too. As a good dad, I'm working on his appreciation of SIG Sauer craftsmanship. 😀

We enjoyed about an hour of shooting before a large family showed up and wanted to share the range. When it comes to strangers at the range I'm anti-social, so we packed up the gear and let the new folks have the range. We had brought along the rifles too, but the rifle range was full by this time. The boy has a long break before he heads back to school, so I'm looking forward to shooting more in the coming weeks.