Another Trip to the Range

It had only been a little over 24 hours since my son and I were at the range, but since I'm on a "staycation" I decided to squeeze in another outing yesterday. This time I opted to visit the local indoor range in order to get in some practice doing quick followup shots. Where we shoot outdoors, we are allowed to draw from the holster and even shoot on the move, however the rules call for a couple seconds or more between shots; the actual required delay depending on the whim of the range officer. One can't draw or move indoors, but you can shoot fast if desired — go figure.

I had a short wait to get checked in at the range, as the proprietor was processing paperwork and explaining the rules to first timers. It seemed there were a lot of Christmas guns in play, as well as apparent first time shooters. That time was spent observing and sizing up the other folks using the range. 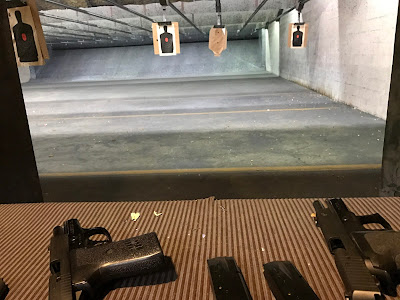 I set out my target between 7 and 10 yards, and varied the number of shots in the fast followup from one to four, depending on how I felt. Shooting in the low light of the indoor range added to the challenge, and I frequently brought my target in to check the hits. I was pleased to see decent groups, at least keeping all the hits within the -0 zone of my practice IDPA target. Eventually I grew tired of hunting down the lone range stapler to change my target, and switched to using some stick-on splatter targets.

Shooting at the indoor range is seldom without some paranoia on my part. I keep an eye on the other targets around me to see how accurate the folks in neighboring lanes are being. I step out of my lane regularly just to see who's around and what they are doing. Watching a woman enter the range and adjust her hearing protection with the same hand holding her rental gun was a gut-wrenching moment. Despite some distractions, it was an enjoyable time. I go through ammo much faster than at the outdoor range with it's multi-second shot delay rule, but still found the practice beneficial, and fun. 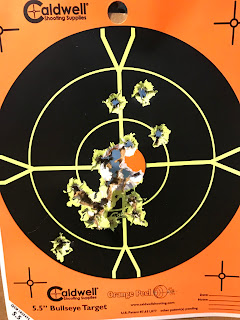 After I finished shooting, I used my phone to go online and check out Facebook statuses of some local breweries with new beers I wanted to try. I figured I go have a beer somewhere. (Vacation, remember?) Sadly they were all closed for at least another hour. I guess that's the drawback of being off during the week. Not wanting to wait around, I headed home to raid my own beer fridge.