Yea, pretty much a typical weekend.

Finally, it was time actually get to the lights. Hmm, that string doesn't light. Wait, this one only lights halfway. I have to wonder, how do Christmas light strings go bad between packing them up in January and unpacking them in December? So, it's off to the hardware store for more lights in order to finish the task. I must say, it looks good once we're finally done so it was worth all the extra work.

After Mass on Sunday, Colleen asked "Are you going to the range?" I hesitate and she tells me she's going to do more decorating. "So you should go," she says. Who am I to argue?

I packed up the little Walther .380 that I'm considering shooting in IDPA BUG matches next year. I've not shot it in a few years, so figure it'll be fun. Anticipating the sting, I jerked the first shot, but the next 11 from 7 yards were right on. 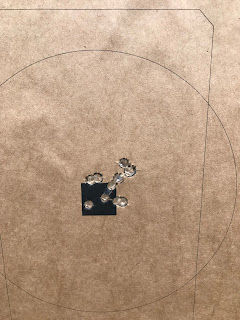 I ended up putting 50 rounds through the little gun, shooting from 7-15 yards. I was pretty pleased, even if I did walk away with a bit of blood on the web of my hand. The tang on the handle digs in a bit. It's not too bad, but 50 rounds was enough "fun" with that gun. A bit more shooting with the SIG P226 rounded out the quick trip.

Returning home, it was time to sort through more extension cords and finish the window candles. That task completed, we decided to head over to Harry's Alehouse for a snack, and a beer or two. Having this place so close to home is going to be detrimental to my wallet, and my waistline. We opted for a couple appetizers; Pulled Pork Tostadas and Grilled Texas Wings. Either appetizer would make a full meal, and the tostadas were especially tasty.


Standing outside admiring the lights on the house Sunday evening, it truly seemed like winter. It felt cooler than the 37° shown on the wall thermometer, and is but a preview of the weather to come. The trips to the range may be less frequent, but at least it's always warm at the pub.