I was fortunate to be able to shoot two IDPA matches last weekend. After the demoralizing BUG match, it was fun to shoot another match on Sunday at Cavalier. This time I shot a full size pistol, with much better results.

The weather was "iffy" on the morning of the match. There was a light drizzle falling most of my drive to the range, but the precipitation stopped by the time I arrived, though the skies remained overcast. All the targets originally had plastic bags covering them, but the bags were removed for shooting. (Thankfully! I hate pasting bagged targets even more than shooting them.)

There were but twenty hearty shooters who braved the weather that morning, and we were treated to a fun match. We all shot in one large squad, but the match progressed quickly with everyone pitching in to help score and paste targets. Shooting with the extra large squad was a lot of fun and there were equal amounts of advice and good natured rubbing being given out.

The first bay held two courses of fire, which consisted of six targets each. We found ourselves weaving around walls and barrels to find the targets on both courses. After shooting the first course, we immediately reloaded and started the next one. On the final shooting position I mistakenly shot the targets out of order, earning a Procedural Error penalty. 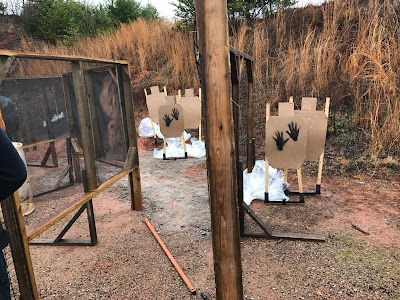 The third course of fire started with three targets in the open, but with barrels providing a vision barrier. Moving to cover we engaged a lone target down a hallway. Advancing down the hallway we moved to a shooting position on the right before crossing back to the left for the final two targets. 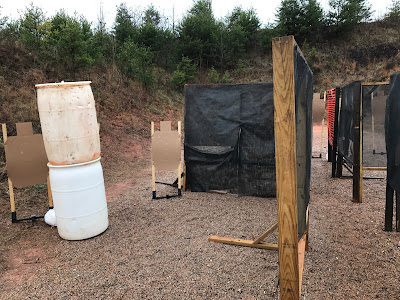 The final stage had us seated at a table, with the unloaded gun in a box and all reloads on the table. At the start we loaded the gun and engaged three targets with three rounds each, followed by three falling steel targets. All shooting was done while seated.

This was a fun match, and I was pleased to shoot well. I ended up with just three target points down, plus the regrettable three second PE. The match went quickly, and we were able to finish before the rain started. It was a treat to get to shoot two matches over the rainy weekend. Despite some post-match coffee at home I still needed, and enjoyed, a Sunday afternoon nap. 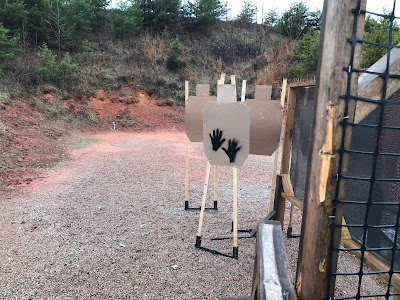 This was the first match I shot under the 2017 IDPA rules. The most noticeable, and widely discussed, rule changes are the addition of fault lines designating "cover", and the one second per point down scoring. I actually found it easier, and certainly quicker, to get into each shooting position. The tactile fault lines made it simpler than looking down at my feet before shooting. Countering the faster movement, it's very obvious that accuracy is going to be a bigger part of the game than in the past. So far the changes, from my limited experience, are for the better.

Many thanks go out to Match Director Chris, and to Tess, Rich, Mike and everyone who came out to put on a super match, despite the gloomy weather.