It's Friday And There's Range Time

For this week’s range trip I opted to shoot the compact SIG P239 since I’ll be shooting it in a match soon. It’s also the firearm that I carry most often, so I like to shoot it regularly.

I decided to run Julie Golob’s 50 round drill a couple of times, setting the target at 7 yards. The goal is to only score -0 hits, anything else is considered a miss. While there’s no time limit on the drill, I did try to shoot as fast as I could and still get the hits, though slowing down would have made for a more impressive accompanying photo.

Using the IDPA target outline for scoring, on the first I had seven misses out of 50, five of which were on head shot attempts. On the second run, I slowed a bit for the head shots and only missed two, but dropped five body shots. 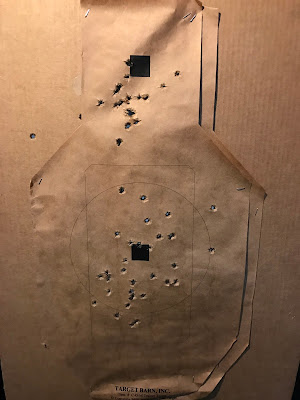 After I expended the 100 rounds I had packed, I had the urge to shoot a bit more, so I purchased 50 more rounds from the range. This time I set out a B-34 target and worked on shooting out to 20 yards. I was mostly pleased with that round of shooting, but noticed a tendency to shoot slightly low.

Lessons learned today: I need to concentrate on grip pressure with the slimmer gun, and also watch the height of the front sight to keep from dropping low shots. And that gives me an excuse to go back next week. Even though the shooting wasn’t quite as accurate as I would have liked, the outing was a fun diversion. And now we know there are health benefits too.