I was plagued by out of town guests at work last week, which meant later days in the office, and therefore was unable to get to the practice range. Unfortunately, my weekend match plans were also scrapped due to inclement weather. Needless to say I was quite anxious to get in some range time, which I was finally able to do after work on Tuesday.

Based on my observations from the last few matches, my live-fire practice plans for the immediate future are to focus on sight alignment and that elusive smooth trigger press.

For this quick before dinner outing I brought just 100 rounds, and planned to shoot fifty with the SIG P320 Compact and the other half with the Full Size P320. The target distance was 10 yards. 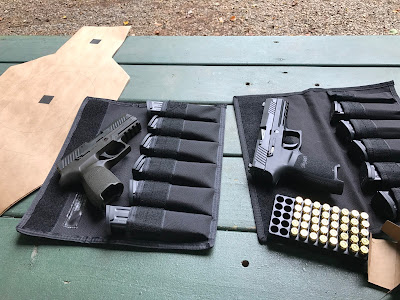 Despite the low round count and the brevity of the session, it was a beneficial and enjoyable outing. I was pleased with the hits, though I noticed that on the controlled pairs I had a tendency to drop the second shot lower than the first. Next time I do this I'll increase the number of multi-shot strings and work on that further. I was pleased to see no discernible difference in accuracy between the two guns, at the speed I was shooting.

Switching to the P320 Full Size after shooting the Compact showed another reason I've grown fond of the P320 platform — there was no need to change the holster or the magazine pouches between gun. That makes it even easier to pack for the range, which I hope to be doing again, very soon.