First Oktoberfest Beer of the Season

I make an effort to try as many different Oktoberfest beers as I can each year. A dinner out at BJ's Restaurant was the start of the 2017 Oktoberfest season for me. 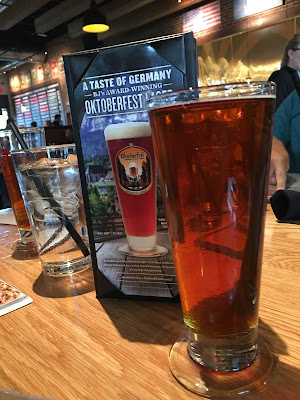 BJ's Oktoberfest pours a bright, transparent reddish-orange. The advertising glamor shot to the contrary, there was but a thin ring of head at the top of the glass. The beer itself is extremely low in carbonation with a flat mouthfeel. The flavor was a rich maltiness with very little bitterness.

I'd rank BJ's Oktoberfest as average. Not bad, but not exceptional. Surely, it will be just the first of many Märzen style beers I enjoy in the next couple months.