I was most anxious to get out to another IDPA match. After last week's let down, I needed to shoot, and shoot well. A fun hour at the indoor range during the week was nice but I needed the thrill of competition to feel in the groove again.

As I did at last month's match at Cavalier, I opted to shoot the SIG P320 Compact in the CCP division. This time fortunately with better results, likely due in part to more practice of late. I finally have 1000 rounds through the gun and am getting more comfortable with it.

The first stage for our squad started us shooting a paper and a steel target in the open, then backing up to engage two more targets from cover. A couple more short sprints to two more cover positions to find more targets finished the stage. A quick stage and the "first stage jitters" were squelched.

Our next stage had several interesting twists in store. Six of the seven targets were turned on their sides, and were mostly presented with limited exposure. The stage started with two open targets, one near and one far. Advancing down range we faced two more partially exposed, and sideways, targets that were engaged in the open. The final three targets were seen around or through a wall of barrels. I was the first shooter on this stage, and though mostly happy with my run, made a couple tactical errors which affected my score. In my head I registered the direction of "shot in the open" as "shot on the move." As such, I shot the two hidden targets while moving, instead of stopping for a better aim at the head area. Secondly, I could have taken a make up shot at the first far target when I arrived at the up range position, but failed to even look at the target and the -3 hole. 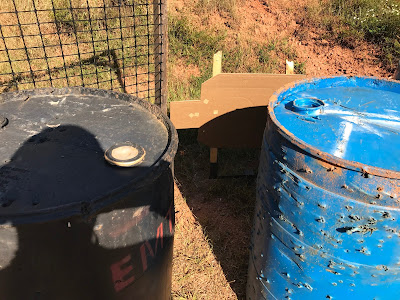 Walking up to the next stage I thought, "That's a lot of targets." There were fifteen threat targets, plus a bunch of non-threats arrange along an L-shaped course. On this course of fire just one hit on each target was required. Starting at one end of the wall, the first target to be engaged was a long shot at the opposite end of the "L." The making our way down one side and then across the front of the bay, we engaged all the other targets. Many of the targets required quite hard leans around cover. I made more than one shot with just one foot on the ground. Adding to the challenge, a mixture of hard cover and non-threats meant that many of the targets presented only the head area or a limited body zone.

The first target engaged was also available from the last shooting position if a make up shot was required. This time my game plan included a check of the target before I finished. I was shooting CCP and wasn't used to having just eight rounds in the magazine, and having taken a couple of makeup shots during the run, when I got to the end I wasn't sure what was left in the gun. As I engaged the last two new targets I was hoping I didn't go to slide lock. I then turned to that first target and fired the last round in the gun. Whew. 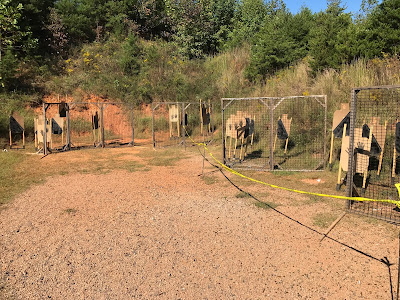 The fourth and final stage we shot involved three moving targets. We started out seated at a table, with the gun in the proverbial box. There was a stomp plate under the table at our feet. Stepping on the plate activated a fast 'in and out' target that appeared from behind some barrels. It also activated a swinging target which reappeared repeatedly. Finishing those, there was a stationary target to be engaged before we stood and moved to a downrange position. From there there was a high head shot target, followed by two steel poppers. The second steel activated a quick 'up and over' disappearing target. The run finished with a stationary target. Despite having one miss on the swinger, and dropping some points on the other movers, I thought this was an especially fun stage. 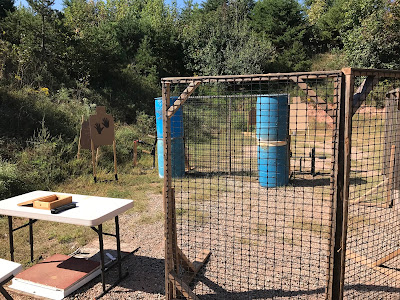 It was a beautiful morning for shooting, even if we aren't seeing the cooler fall temperatures yet. The stages were a lot of fun to shoot. Though not overly difficult, the scenarios put us into some out of the ordinary shooting positions with unique challenges. I had a few more points down that I would have liked, but finished 3rd of 7 in CCP. Most satisfying was no procedural errors and no hits on non-threats.  :-)

The match behind me now, I'm already looking forward to when I can next get on the range.