I wanted to get in (at least) one more range outing before this weekend's match. Since it's looking more and more likely to be wet and cold on Saturday, I opted to hit the non-heated indoor range today — just for that cold hands practice. As it turned out, it was even colder inside than out.

To my chagrin most of the lanes were in use when I started. That typically makes for a loud session, and I am often distracted with concerns over other shooters in the unsupervised range. As it turns out, I arrived as the morning rush was winding down and I shot alone for most of my visit. 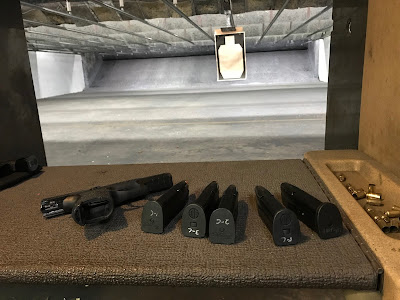 Shooting the Compact SIG P320 this time, I decided to simply shoot the Julie Golob 50-round drill I often use. Since I had pre-loaded the first 5 magazines I was able to get started shooting quickly.

I did three runs of the drill at 7 yards. My best run was -4, with three of those outside of the 4 inch head circle. Despite the -1 head shots, I felt good about the scores. I was especially pleased to have all -0 hits for the 30 total SHO and WHO shots. THAT'S a performance I'd like to replicate under match conditions.

Since I had the range to myself I wish I had brought along my timer, just to establish some baseline time. Instead, I shot at a moderately fast pace, perhaps not match speed, but not "slow fire" either. I was done in under 30 minutes and in the car heading back to the office, reinvigorated to finish the day.