It's been five months since I was able to get to the monthly IDPA match at the Rivanna range in Charlottesville, and I was looking forward to enjoying another fun match at the club. Saturday's weather outlook called for a rainy winter day, however Rivanna moves the matches indoors during inclement weather. It would just be a matter of hoping the frozen precipitation held off until after the drive home.

Four stages were set up on the two indoor bays. Our squad began the day facing a line of six targets, all of which were partially obscured by non-threats. Each of the targets required two body shots, followed by a head shot on each. During the stage I could tell I was shooting a little fast, and not getting a settled sight picture. As I got to the head shots I slowed down a bit, but given my aging eyes and the lower light conditions, I could see none of my hits. I called the head shots good and waited for the score. I was pleased to not have any misses, but was still -8 for the stage. 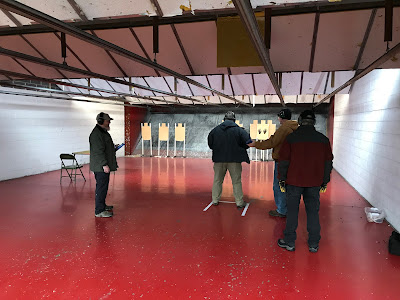 The next stage had us engaging three targets with three hits each from the shooting box, then retreating up range, around a barrel and back down range to find three more targets. Despite the simplicity of the stage, there were strategic decisions to be made; the right shooting box offered closer shots to start, but a longer run backwards; did one use time to take extra shots on the first group in order to save time by reloading on the move? I opted to reload on the move, and start on the left side for a shorter backwards run. I finished just -3 points, but lost my cadence in my shooting at the second position and shot much more slowly than I would have liked.

The longest shots of the match were found on the next stage, which also required the most careful aiming. Six targets, requiring three hits each where shot from cover, three from each side of a barrel. The placement of non-threats were such that no more than half, or less, of each target was visible. I took my time shooting, and felt pretty good when I had finished. There were a couple shots I didn't feel great about, but was also confident I had hit no "good guys." Right or wrong, I opted not to take any extra shots, avoiding additional risks of hitting a non-threat. Despite being -16 points down, I still finished well for the stage overall. 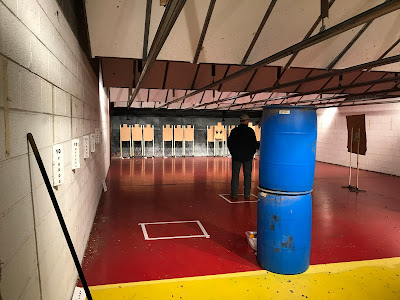 Now finished with that challenging stage, I was relieved to know I had avoided all the non-threats in the match, as the final stage featured open and close targets. However the stage also required strong and weak hand only shooting, all while seated. The unloaded gun was placed in box and all magazines loaded with just 6 rounds on the table. The course of fire required loading the gun, shooting all targets freestyle, reload, shoot all targets SHO, another reload and six more shots WHO. I was pleased to hear the SO call out "clean" when I was finished. Shooting the stage -0 was a great way to conclude the match. As it turned out, this was my best stage finish; a 3rd overall.

Despite the limits imposed by an indoor range, the seemingly simple stages provided interesting challenges and plenty of fun. Unlike the last two matches I've shot, at least we were not shooting in the rain, although was quite cool inside the range. The match ran quickly and I was on the way home by about 12:15. I was thankful to get on the road before the predicted winter precipitation began in earnest, although I did drive through a bit of light snow and sleet.

I was happy to have no misses and no hits on non-threats, despite their preponderance in the match. While I often have trouble seeing the holes on the targets beyond 10 yards, even in the bright sun, the lower light indoor conditions made for an additional challenge. To my frustration, I don't think I saw any of my target holes the entire match, and therefore took no make up shots. On the bright side, that does force me to have confidence in calling the shots. Of course, that in turn calls for more dry fire and more range time to build that confidence. While I noted some things to work on for the future, I truly left the match feeling pleased and looking forward to my next practice sessions, both dry and live fire. I ended up 8th of 47 overall and 1st of 9 shooters in SSP SS. All in all, it was a good day!