June saw a return to (almost) a normal shooting schedule. A couple of range trips and a couple IDPA matches made up the mix. 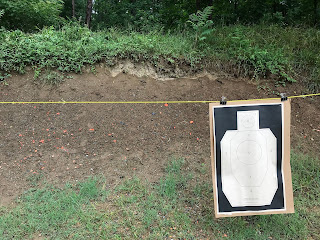 At the beginning of the month, there was a quick trip to the outdoor range with the compact SIG P320. Giving some discipline to my practice, I spent most of the time working on those not fun things that we often hate to practice; support and strong hand only shooting, and precision head shots at distance. I had to burn through a few mags to find the groove. In the end I was moderately pleased, but still in need of work. Interesting, I was doing better WHO than SHO. 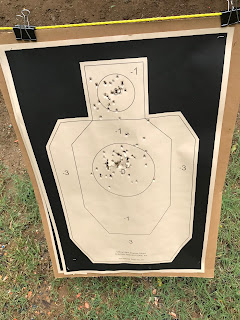 A couple weeks later we were off to the Virginia State IDPA Match in Bristol, VA. On some stages I did extremely (and surprisingly) well. On others, the results were disappointing. A few "good guys" got in the way, and some mental errors crept in as well. (The above mentioned one-hand shooting practice was apparently not enough preparation.) I thought the stages offered a variety of challenges, without being overly complex. A common theme seemed to be luring the shooter into engaging targets out of order when shooting around a wall. There were a lot of shooters getting "the finger" for shooting out of priority. 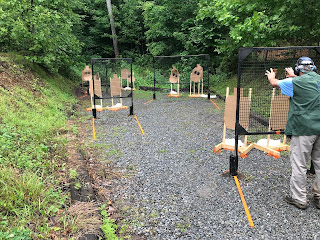 This match is held on the side of a mountain, in quite a beautiful setting. Although there was the threat of rain for most of the day, it only rained for a few brief periods. We did get wet while waiting, but most of our shooting was done without rain. Shooting the match included a four day "adventure" with friends. Staying in a mountain cabin, we enjoyed copious beer, whiskey, and cigars during the mini-vacation. 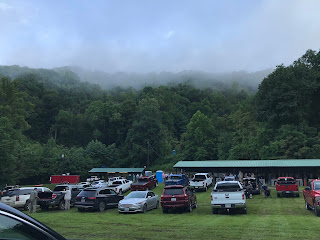 A few days after the VA State match, I made a trip to the indoor range. I certainly have not gotten a good return on investment on my membership this year. Hopefully, that will change in the coming weeks and months. The range was empty when I first arrived. A couple other pistol shooters showed up before I finished. I left realizing just how "pleasant" the indoor range is without rifle shooters in the next lane!

For this outing a took along the Full Size SIG P320. I've only shot the gun on one other occasion this year. I also had the P365 with me, with the intent to shoot it more, but ended up not doing so. I decided I needed a little accuracy practice so I began with the color shapes target that my wife is found of utilizing. The first 150 rounds was spent shooting those aiming points at 7, then 12 yards. I was very pleased with the hits here, even working in quick 2-4 shot strings. Finally I hung an IDPA target at 15 yards and shot the last box of ammo. In a switch of my usual routine of loading up all my mags at once, I loaded only 2 mags of 10 at a time. The result of the frequent breaks to reload magazines was that my shooting stayed sharp through the entire 200 round range session. It was some of the most enjoyable time spent at the range this year, and the traffic on the Interstate, coming and going, was surprisingly light.

June was capped off with the monthly Cavalier IDPA match. Originally this event conflicted with the VA State match. However, due to a scheduling change at the club, the match was postponed a week, much to my delight. I took the SIG P320 Full Size to this match too shoot in the Stock Service Pistol division. 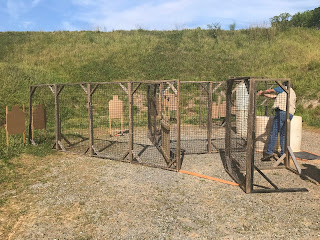 The morning was hot, and then it got hotter. But at least there was no rain. Five fun and quick stages offered a variety of challenges. There was lots of movement required, with little stationary shooting — just as I prefer. Thanks to skilled SOs, and an active squad helping to paste targets, we were done shooting in about three hours. I earned one PE, and tagged a non-threat, but overall was pleased with how I shot. I turned in the best performance of my limited match shooting this year, finishing 15th of 41 overall and 3rd of 16 in SSP. 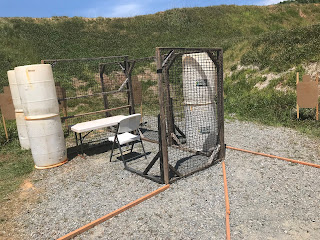 Just six months after my health scare, I am extremely happy to be getting on the range with some regularity. Shooting well, and seeing friends is a great combination. Hopefully, the trend will continue, with an associated increase in accuracy and efficiency.