After last weekend's match cancellation, I was looking forward to getting my "fix" this Saturday with friends at the monthly Cavalier IDPA match. While a bit warmer than the unseasonably coolness of the prior few days, Saturday morning was still quite pleasant. We finished shooting before the afternoon heat set in. The match, as usual, ran quickly and offered some interesting twists along the way. A few photos from the morning are uploaded here for those of you who wish to follow along.

The first stage was shot in two strings. The first string had us starting facing the side of the bay, and had just three paper targets requiring three hits each. The first close target require shooting from retention, one-handed with our shooting elbow held against our side. The second target required turning to the other side to engage, before returning to finish on the final target placed behind the first.

The second string consisted of three falling steal targets placed strategically behind barrels and spread across the bay. The first steel was right in front of the shooter at the start, the other two became visible by moving to each side of the bay. The first target was also visible from the same place we could see the second. Surprisingly, most shooters did not choose to shoot from just two positions, rather taking the longer route of setting up at three positions. I saw that shorter route, but I actually started wondering if I was missing some obvious reason not to do so. I did choose the shorter route and this was also my best stage of the day.

Next up was a version of a stage we shot at the Virginia State Match in June. The course was set up by one of the guys who accompanied us on that trip. Nine threat targets, and a few non-threats were placed behind walls over a spread out course of fire. The "gotcha" spot on this stage was the two very close targets on either side of the wall at the starting point. There was another target placed about 20 yards downrange, that appears first in priority, before the very close target. At the state match I saw many shooters get lured into shooting out of order. No one on our squad Saturday got caught by that. The far target is also visible to be shot at the end of the course if makeup shots are needed. I did and ended up making two my -1 make up shots for two more -1 hits. I earned some well-deserved ribbing from my squad mates for that. 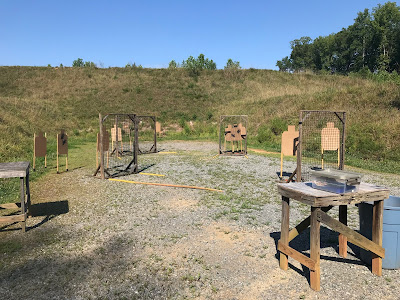 The next course of fire started with just six rounds in the gun. At the start we engaged a near target with all six rounds, before reloading to finish the stage. The challenge on this was the non-threat that was behind the initial target. Shoot-throughs hits on the non-threat are penalized, so one had to be careful of the engagement angle. It was a fun quick stage though. 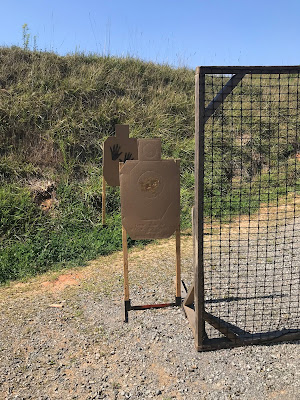 Stage four offered a challenge that was a bit out of the ordinary. Our gun was loaded at the start, but all of the magazines for reloading were placed in a bag. Instead of stowing the mags we had to carry the bag with us, and reload from the bag. There were barrels at each shooting position where we could place the bag if we chose. Other options were to shoot one-handed, or shoot with the weighted bag still in our hands. We also had the choice of two start positions, on opposite sides of the course. Each starting option faced an array of three targets, but each array presented a different arrangement of exposed targets, non-threats, and hard cover. The selected starting array would be shot from a close distance, while the other would be shot from a greater distance. I opted to start with the array that offered larger open target areas, but with a non-threat in the center, and shot strong-hand only. At subsequent positions I set the bag on a barrel, shot two-handed while reloading from the bag. After these initial arrays, we ran down a hallway to engage four falling steel targets from either side of a wall. Although the steel seemed to jump out of the way of my bullets, this was a fun, but challenging scenario. Old habits of reaching to the belt for reloads is hard to break. Although the course of fire was more challenging to describe than to shoot. 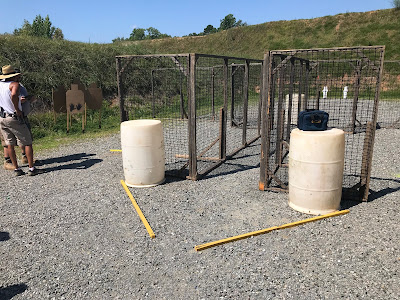 The final stage gave us the "opportunity" to shoot from a somewhat uncomfortable position. Starting with the loaded gun and all magazines on a table set a few feet in front of the start position. Three targets were engaged through a low, long port in the wall. Shooting the targets required leaning, crouching, or kneeling. I knew I didn't want to take a knee and try to get up quickly to finish the stage. I sort of half-kneeled, without touching the ground. It wasn't a comfortable position but it was quicker to get out up from. The stage finished with two target arrays with both an open and a head-shot target each side.

As is typical, the match ran pretty quickly. The courses of fire were challenging, fun, and presented some unique shooting tasks for our enjoyment. I felt I shot pretty well, with no procedurals, no hits on non-threats, nor any misses. It was a good feeling to shoot a clean match. I did shoot a few too many points down on a couple stages, and could shoot a little faster overall, but I was quite happy to shoot as I did. I finished 20th of 39 overall and 7th of 18 in SSP division. Not quite back where I want to be, but certainly making progress. And now to start planning for next weekend's match.