It's been a while, for sure, but I finally got to enjoy some shooting activities this weekend when the monthly IDPA match at the Cavalier Rifle and Pistol Club resumed after a break for the Wuhan virus. I hadn't shot for nearly three months, and my range bag literally had dust on the top. The weather, which has been all over the place of late, cooperated this morning with the temperature hitting the low 80's.
The first stage our squad shot consisted of six targets spread out across the bay and hidden by various walls and non-threats. The targets were visible as you moved across the stage along a railing. With proper planning, they could all be seen from two positions. It was a good shake off the dust stage. 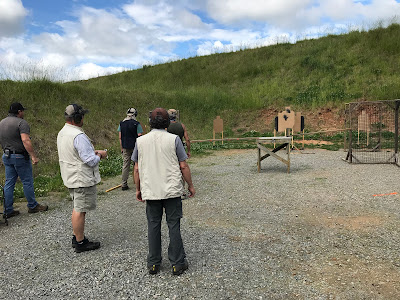 The next shooting challenge was a line of seven targets all shot while standing behind a table. The starting position was with the unloaded gun on the belt, and the first magazine held in both hands. This was my best stage overall, despite fumbling the start by missing the slide with my racking hand. 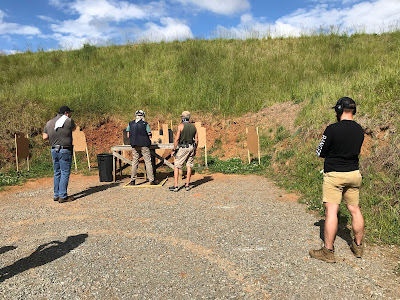 An unloaded gun start was also featured on the next stage. This time, the all magazines were required to be stowed on our person. Since I only use two magazine pouches, that meant starting with the first mag stuffed in my waistband. This load went more smoothly than the previous start. After loading and engaging three close targets, we made a somewhat awkward transition around a barrel and wall to the next point of cover and engaged two more targets. At this point, the gun was emptied of the 10 starting rounds, but my brain was ready to fire the "extra" 11th round, as if it was a loaded gun start. That momentary confusion resulted in my doing a standing reload, instead of more efficiently reloading while moving to the last point of cover. There are still some cobwebs to be dusted off it seems. 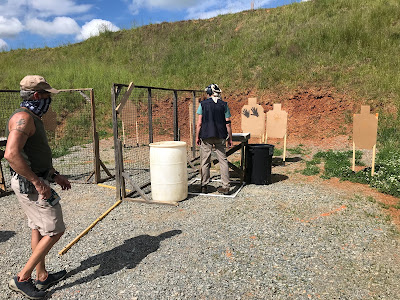 The next stage was rather interesting, and had us shooting from a semi-enclosed space. A triangle formed by stack of barrels and a fault line, restrained all shooting through narrow openings between the barrels. The targets were arrange in a "V" that came to a point centered down range. Shooting the targets in priority meant alternating sides as you shot targets at varying distances. The first two targets, mid-range, where the ones visible at the start. Those were shot, then the shooter moved slightly forward, making the closest targets visible, before moving focus to the threats further down range. Shooting among the barrels gave the added distractions of bouncing the sounds of gunfire and the flying brass back to the shooter. Once it was all said and done, it was a fun stage to shoot. 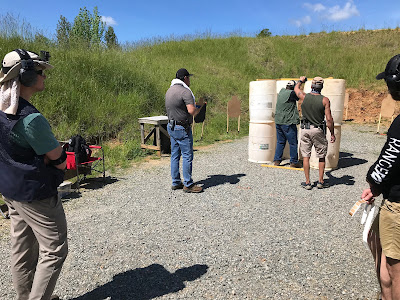 Finally, we got to the stage we had been hearing about all morning. A two-string scenario stage, shot with the support hand only. String 1 started with the loaded gun in our support hand, with the barrel touching a mark on the wall. We then engaged two targets to our left, and a third around the left side of the wall. The second string was shot to the opposite of the stage, engaging one open target to the right of the wall, then moving forward to find two more target around another wall. 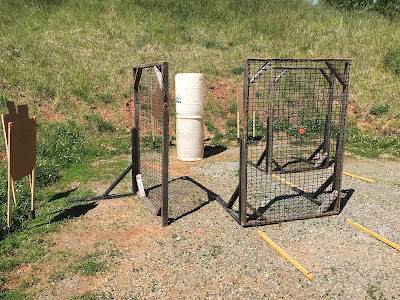 Seeing friends at the range had been a long-missed pleasure. The idea of not shaking hands in greeting and being reminded to "stand six feet apart" puts a damper on the reunion, but it was still a fun morning. I really don't understand why it's called social distancing, there is nothing social about the restrictions being imposed upon society. Perhaps compliance conditioning is a better term.
Shooting the five stages took only about two hours. I was pretty satisfied with how I shot, finishing 4th of 13 in SSP. I was a little slow in my movement, and certainly a little sloppy in shooting. However, I had no targets that scored lower than -2, had no hits on non-threats, or procedural penalties. All in all a very good morning and a welcome sign of more matches anticipated soon.
Mused by David