The Saturday of Father's Day weekend offered a rare, for the year 2020 so far, chance to shoot an IDPA match. On an overcast but warm morning I headed over the Rivanna Rifle & Pistol club for the "monthly" match. About 85 shooters braved all the pandemic posturing to enjoy the outdoors, camaraderie, and a morning of good shooting.

The first of four stages had us starting seated, with our unloaded gun in a box and magazines on the table. We faced an up close non-threat directly in front of us, with five targets downrange to be shot in priority. As a twist, the stage briefing stated the first four targets were shot while seated, while the last and furthest target was to be engaged while standing. All targets required three hits on each. 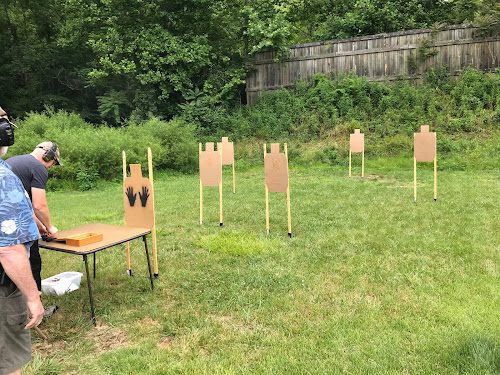 This is was fast and fun stage, which I was pleased to shoot zero down.

The next stage involved shooting while retreating. The first two targets were mandated to be shot while standing at the start position, before we began backing up to engage four more targets as they appeared to either side as we passed by the barrels hiding them. Again, each target required a minimum of three hits on each. 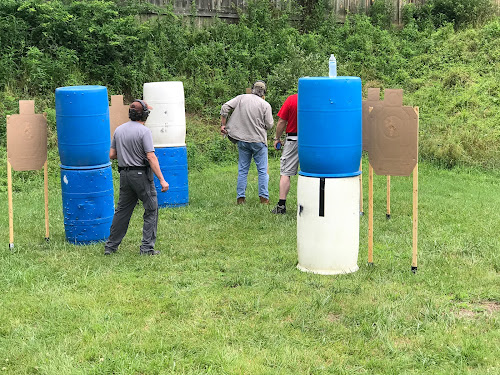 Zero down again for me on this stage, though I did lose a bit of time fumbling the reload.

Moving on to stage 3, we found six targets and a couple of non-threats behind a wall. The two center targets were engaged through an opening in the wall. Two more targets were to be found by moving to both ends of the wooden barriade. Again, all targets required three hits, though this time it was specified as requiring two to the body, and one to the head. 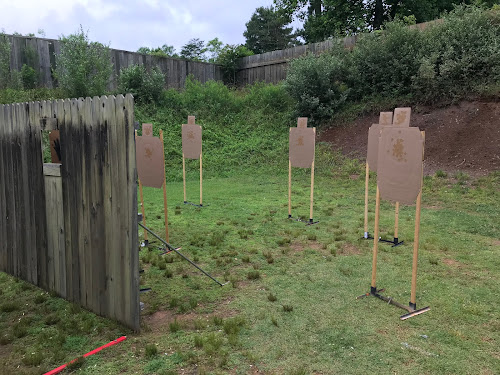 The last course of fire had us shooting from a marked box on the ground, our movement limited to a few feet. Three non-threats placed mid-bay had to be avoided in order to engage the eight targets lined up at the back, each requiring two hits. Now the pressure was on, at least in my own head. Could I complete the match down zero? 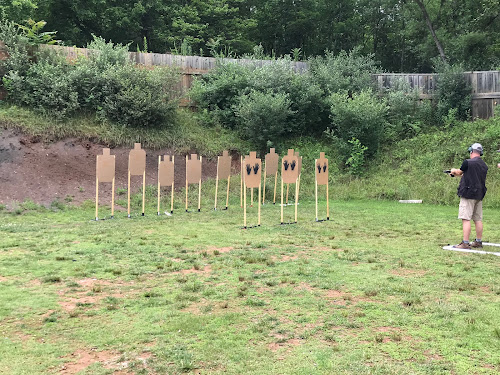 I was to be the next to last shooter on the last stage, but I avoided ruminating on that question while I waited. When it was finally my turn to shoot, I tried to do so deliberately, and at an even pace. It felt good, but the holes in the cardboard where just out of my vision range. I walked down range and listened to the call, "down 1."

Okay, down just one point for the match. No hits on non-threats. And, as I recall, a single make up shot the entire match. Of course, some would say such a clean match simply means I shot too slowly. But, I was pleased with the performance, finishing 4th of 18 in SSP.

I've been able to shoot very little during the covid-related panic and tyrannical restrictions on personal freedoms. For the morning at least, it was a pleasure to be be surrounded with other folks enjoying a good time.