A Wee Bit of Normality

Around our house we are especially pleased to see the month of May be done. Was it really only 31 days? Seems much longer. Like everyone else of course, we've been dealing with the "COVID-1984" restrictions. On top of that, we've had work being done on our house for the last several weeks. A kitchen renovation was planned long before the Chicom virus was in the news, but the work commenced in May. It's bad timing to be kitchen-less at the same time restaurants are closed. It's bad timing to have construction going on in your house when you are locked down at home. Once the kitchen work was done, we had painters in to refresh the entire first floor. Surprisingly, the painting was more disruptive to life (and work from home) around the house than the kitchen activity. But, that's all done now. This will be the first week in a month we had our house to ourselves. Of course, there's a lot left for us still to do, as we haven't fully moved all our stuff back into place yet.

On Saturday, after some work sorting house out, I picked up a friend and we headed over to the Olde Towne Tobacconist outpost at 1781 Brewing for an afternoon of visiting, beer, and cigars. It was extremely pleasant to sit outside, talk to other humans, and just enjoy the nice weather. Saturday evening, Colleen and I sat in our refreshed living space and enjoyed a relaxing dinner, all the while making plans for the next projects.

Sunday was glorious by virtue of finally being able to go to Mass, as the governor has now granted permission for worship to resume in our part of the state. We had to wear uncomfortable face masks, but it was Mass nonetheless. Even though the church was sparsely populated, we were able to celebrate live and in-person, rather than via an online stream.

In the afternoon we took advantage of the weather to enjoy the outdoor setting at 1781 Brewing. I believe it was the first time in 2020 that Colleen and I were able to get away from the house for an afternoon of relaxation. There was no live music playing as so often happens in the warmer months, but the sun was shining and the beer was good. And there were smiling humans out and about. Patrons were limited to two inside at a time when ordering beer or wine, but the outdoor space was full of "physically separated" families and dogs.

The cigar lounge is closed on Sunday for sales so I had brought along my own options for smoking. After grabbing a mug of 1781 Brewing Farmhouse Pale Ale, I lit up a Rocky Patel Vintage 2006 Sixty. 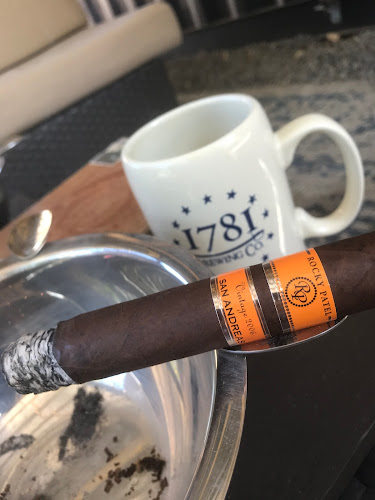 I typically enjoy darker beers with cigars; stouts, dopplebocks, even a red ale, are frequent choices. But I do enjoy hoppy beers, though they aren't always the best cigar pairings. The Farmhouse Pale Ale is a moderately hopped ale that strikes a nice balance of citrus and fruitiness. The hop notes leave a clean, short finish on the palate.

The cigar is one of my favorites, the Vintage 2006 in the 6" x 60 vitola. A Mexican San Andrés wrapper,  USA Connecticut Broadleaf binder, and Nicaraguan fillers combine to make a flavorful but not overpowering smoke. Dark chocolate, oak, leather and a mild sweetness predominate. It all works extremely well with the mild hop and fruit notes of the beer. It's a long smoke too, requiring a refill of my mug.

We were later joined by some friends who happened to be out taking advantage of the beautiful environs and new freedoms as well. We enjoyed catching up with them as we wound down the afternoon.

Yes indeed, the weekend brought a bit of normality to our lives, despite the news of the anarchists around the country using a tragedy as an excuse to bring their cowardly violence to bear on innocent people. Let's pray that we are soon able to get back to peaceful living, and the restrictions on free movement and free enterprise will soon be a thing of the past.