Another Saturday and another chance to shoot. This past Saturday I joined some friends for the monthly IDPA match at Cavalier Rifle and Pistol Club. This was the second weekend in a row when I was able to have some IDPA fun. It's a nice respite from all the pandemic pandering.
Our squad kicked off on a stage which had us starting mid-stage facing a wall. The stage was generally symmetrical, with numerous options for engagement. In fact, I noticed the first four shooters all ran the stage differently. For my part, I began by retreating to engage targets from cover at each side of the course. Then moving forward to the center fault line, there was a single target visible through an opening created by walls and barrels. Continuing forward to the center, two more targets were visible through that same opening. 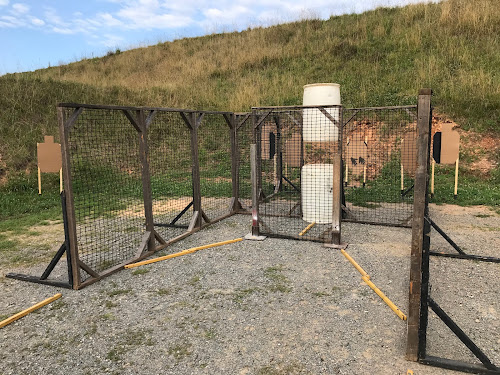 That was a fun stage, and I was happy to shoot it -0.
Moving on to the next bay, we found an interesting stage, with moving targets and steel. To either side, closest to us, was a swinger on the left and a disappearing drop turner to our right. Down range was a single static target and three steel poppers, one of which activated both movers. Each paper target required three hits each. Since neither mover was visible at the start, the down range targets had priority. However, as soon as the activation steel was engaged the movers took priority. There was a lot of discussion on the best way to shoot it, taking into account priority, timing, and concerns for not having an empty gun when the disappearing target was activated. With all the discussion and thought going into the stage, I neglected to take a picture.
I felt good going in to shoot the stage. The movers were moderately close, and there seemed to be plenty of time to get at least three shots in each. Yet, when the holes in paper were counted I was left 10 down for the course, mostly due to a couple of -3 shots, as well as some -1 holes on the swinger. Moving on…
Another retreating start was featured in the next stage. We began mid-stage, standing in a corner. Backing up range, there were targets engaged around walls at either side of the course. Next moving down the center of the array of walls, we shot a lone target from the fault line at an opening in the wall. Moving forward a couple more targets became visible through the same opening. Two more shooting positions came into play, before finishing the course of fire on a head shot only target while doing a hard lean around cover. 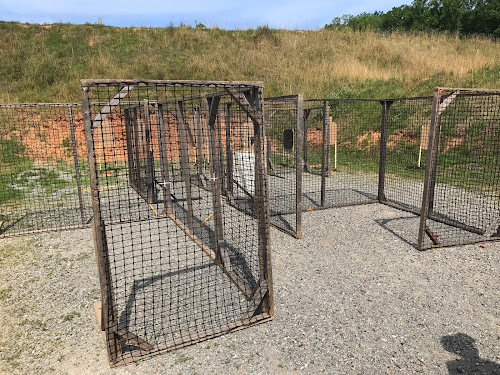 It was a quick stage, and I finished down two points. At least I was back on track after the previous run.
More steel showed up on the following stage. Shot from a single position, the stage consisted of four paper targets and four falling steel, placed at three levels of priority, the steel in the middle. Each paper target required three hits each. 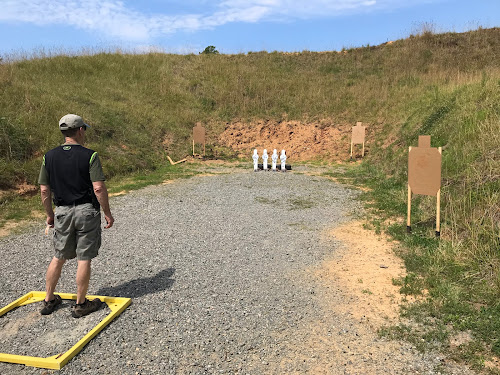 Rapidly engaging the first two targets, I swung towards the steel. I caught a glimpse of a -1 hit but moved on before it registered. The steel fell quick with one make up shot. The extra shot actually was a benefit in allowing me to reload on the transition to the back paper targets. This turned out to be my best stage, finishing second in SSP and fourth overall for the stage.
To shoot the last stage we engaged two targets close up while moving, again backwards, to engage a target from cover. Then we crossed the bay to enter a tight zig-zag hallway and find the final two targets. I ended -1 for this stage. 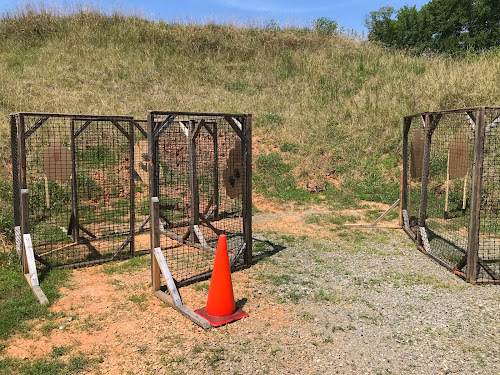 During my post match drive home I contemplated the morning's performance. Excepting the disaster of the movers, I was 4 points down for the remaining four stages. So, I was pretty happy with my accuracy. I find it's my movement and transitions that have been hurt the most by the months of limited or no shooting. I did notice myself hesitating and verifying shots before moving to the next position. Last week I caught myself dropping the gun out of shooting position while moving, and getting it back up late. I tried to remember that during this match and transition better. With matches limited and range time even more rare, perhaps I should get back to the discipline of dry firing. My (old) dry fire routine included practicing transitions between targets and positions which would likely help my overall score.
By the end of the match I was worn out from the heat and sun. Nonetheless it was a fun morning of shooting and seeing friends. Now that summer is truly here, heat and humidity on the range will be the order for the day over the next a few months. I'll take that over "social distancing" any day.
Mused by David