Liga Undercrown and a Bourbon

At the end of another long work day (aren't they all?) I settled down for a quick dessert after dinner. I grabbed a Liga Privada Undercrown Maduro from the humidor, and pondered an accompaniment. Spying a bottle of Jefferson's Ocean Aged At Sea Bourbon, I opted to pour a wee bit of the whiskey to go with my cigar.

Jefferson's Ocean Aged Bourbon matures in oak barrels for six to eight years before being placed on a ship to travel the ocean for another six months. The voyage is said to cross the equator 4 times with stops in 30 ports. Unsurprisingly, the ocean voyage affects the flavor. I found the 90 proof bourbon to be smooth and mild, with a hint of brine in the flavor. Admittedly, that was a little off-putting the first time I sipped it, but it quickly grew on me. I now find it a most refreshing drink. 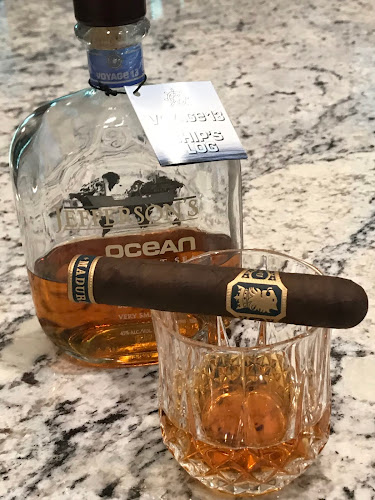 The Liga Privada Undercrown Maduro from Drew Estate is one of my "keep on hand" cigars. This cigar was from the latest batch added to the humidor a couple months ago. The cigar features a Mexican San Andrés Maduro wrapper (another of my "favorite things"), Habano Connecticut binder, with Brazil Mata Fina and Nicaraguan Habano leaves as fillers. The creamy smoke features rich espresso, some cocoa sweetness, and a hint of dark fruit. As a medium-bodied smoke, the cigar paired well with the mild bourbon, neither dominating the palate. 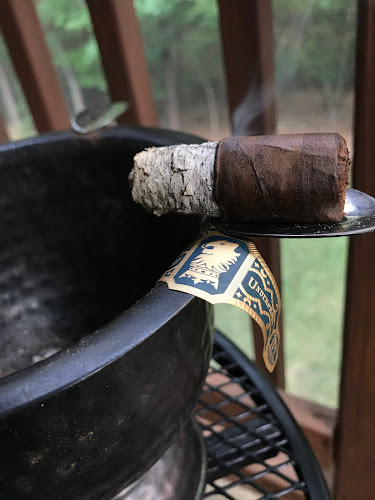 The Undercrown Maduro is one that always gets smoked down to the hot nub. And then still set down with a bit of disappointment when it's done.