On Saturday morning I headed off to Charlottesville to shoot the monthly IDPA match at the Rivanna Rifle and Pistol Club. Of late, this is one of two matches I get to most months, and my only range time, so I was looking forward to it.
The crowd that gathered in the morning for the match was a little smaller than usual, the predicted oppressive heat no doubt a factor. But the heartier souls ventured forth.
Stage one of the match had us facing an interesting array of targets. Three target groups at two priorities of distance requiring the "full" targets to all be engaged first, and then there were four head-only targets that we came back to and engaged in priority. Once we sorted out the instructions it was a fun stage to shoot. This stage got my match off to a good start, but would also represent my best finish of the morning. 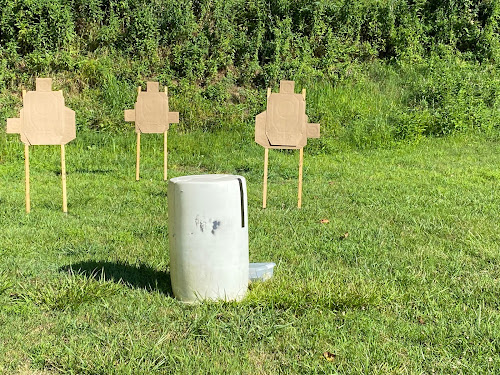 Stage two required shooting from a seated position, with the loaded gun and spare mags on the table at the start. There were five paper targets visible, along with two falling steel poppers. The poppers each activated a swinging target hidden by barrels on either side. Engaging the steel brought the swingers into priority. 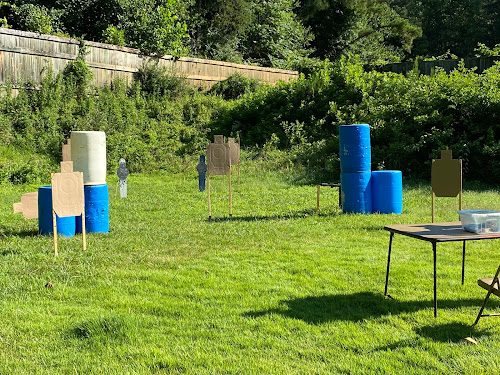 I was happy to see the swinging targets, as I don't get to practice with them much. I did better on them than I did on the previous match, getting all the hits on paper, but was still 10 down for the stage.
The third stage we shot was probably my favorite of the match. The interesting course of fire was shot entirely through a narrow opening in a wall. The seven open targets were arranged in a close, semi-circle, however a "V" formed by two more wall sections forced the shooter to shift positions to see all the targets. 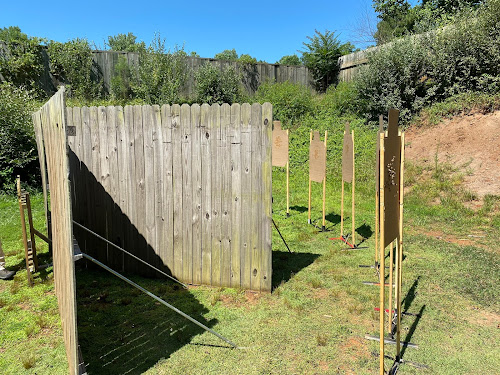 The start position was facing up range, requiring the shooter to turn and bring the first targets into view. A small wooden fence prevented the shooter from leaning into the opening. Positioning was the key to the stage, having to shift too many times would affect performance. Well, positioning and speed. The close-in targets were a temptation to shoot too fast. I zipped across the targets a little too quickly, putting a few shots high on the paper, and coming away four down. However, it was a fun stage to shoot. 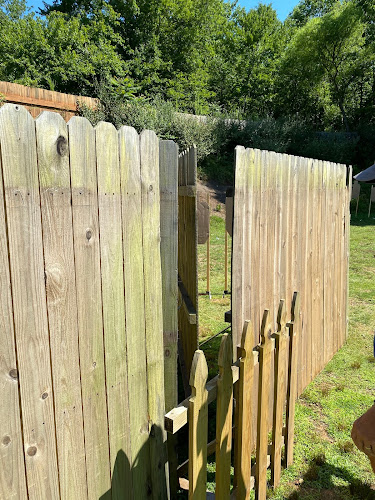 The heat of the day, now ramped up, and I believe effecting us all, we approached the last stage. A simple line of six threat targets, shot from a stationary position awaited. Well, simple except for the three non-threat targets covering two-thirds of each target. Even so, it didn't look overly challenging, though there did seem to be an alarming number of hits on those non-threats from previous shooters. 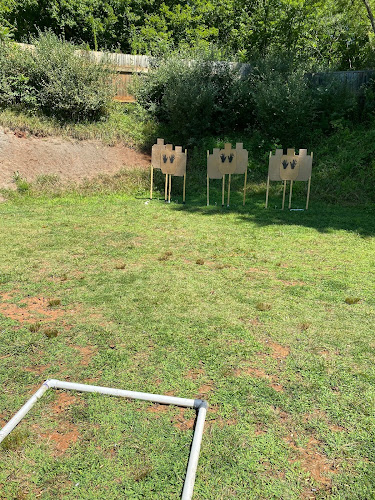 These were the only penalty-incurring targets in the match. Making up for that, I managed to hit all three. I could blame it on the heat, or the stinging sweat in my eyes, but in truth I just rushed to be done.
The day would turn into a hot one, and it did affect my performance, but it was a day to be enjoyed nonetheless. Once again, going out and being around smiling people enjoying themselves was a most welcome diversion. While everyone was respectful of personal space, there was none of the cowering from fear of being around our fellow humans that is gripping our Nation.
It was a quick, fun match. Four bottles of water, and one of Gatorade later, I was in the air conditioned car heading home to spend the rest of the day relaxing.
Mused by David