On July 4th, we headed over to one of our favorite spots to enjoy some live music, food, beverages, and, for me, cigars. The brewery / winery grounds were not all that crowded and we found a table under the shade of trees and set up camp. I had seen a social media post that a new cider was on tap at the brewery and headed into the winery for a couple glasses. Wilderness Gold Rush Cider is a dry, tart cider that turns out to be quite refreshing. I had intended to try just one before switching to some of my favorite 1781 Brewing beers. However, the cider was so enjoyable, and a perfect foil for the warm summer day, I decided to stick with it for the rest of the afternoon.

I lit up a Powstanie Habano to go with the crisp, dry cider. It occurred to me that the Powstanie was a somewhat fitting smoke for a day which celebrated independence. The Powstanie name comes from the Polish word for "uprising," and the company's logo includes symbols used by the Polish Resistance during World War II. And it's simply a good cigar as well. 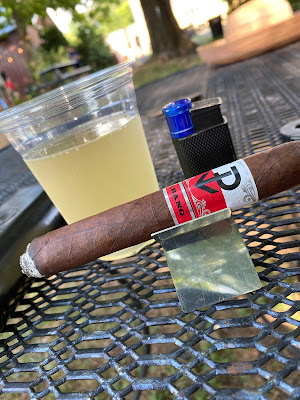 A couple ciders later, it was time for food. The food truck of the day was Barbara's Soulfood Kitchen, serving up a wide range of tasty foods. Colleen opted for a crispy chicken sandwich, while I enjoyed a crab cake sandwich and an order of onion rings. The food was delicious and well prepared. We'll definitely  look for this vendor around town again.

As we continued to enjoy the live music, and the cider, I lit up another cigar to enjoy. The second smoke was one of the RoMa Craft CRAFT 2020 selections. I picked up a box of these uniquely wrapped cigars a few weeks ago and have been enjoying them. The CRAFT series is an annual, limited release, that features various combinations of Connecticut Broadleaf and Ecuadorian Connecticut wrappers featuring Mexican San Andrés accents, and also American Broadleaf and Ecuadorian Habano wrappers decorated with Ecuadorian Connecticut leaf. There are five different patterns presented in the box of 10. Distribution was limited to ten retailers, fortunately one my local shops was included in that group. 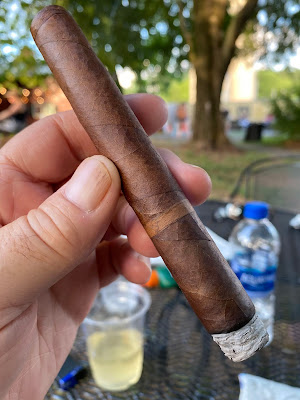 Both of the cigars paired very well with the cider. They are medium to full bodied with notes of nuts, wood, earth, and cedar. The cigars are similar, featuring some of the same tobaccos, and even rolled in the same factory.

We enjoyed ourselves through the afternoon and into the evening. When we finally decided to call it quits, we were packed up and heading for the car when we were told that fireworks would be visible soon. So instead, we set up our chairs by the car and enjoyed the show. 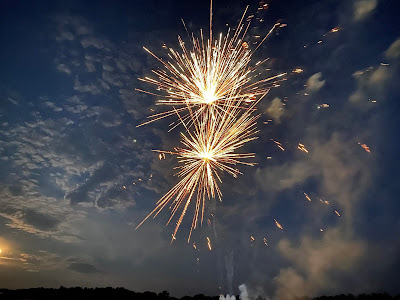 It was a most fitting ending to a day of recognizing and celebrating the wonderful gift of living free in this great country.