Yep, It's Hot Outside. Matters Not.

I keep reading there's an oppressive heat wave coming to Virginia. Really? It's July. In Virginia. I guess it does qualify as a heat wave, but it's hardly unusual or even unexpected. 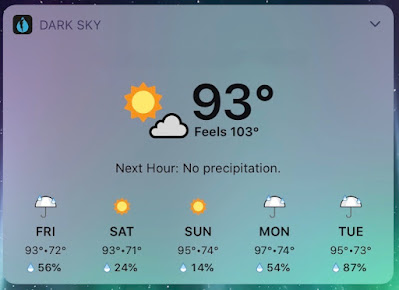 More importantly, it was Friday. Despite the reading on the thermometer, the end of another work week means it's time to break out the beer and cigars. We have a lot of "old" higher ABV beer that's been aging in the cellar, some for over a decade. So Colleen and I looked through the stash and grabbed a bottle of Avery Barrel Aged Vanilla Bean Stout that enticed us. To go along with it, I selected an HVC La Rosa 520 Toro. 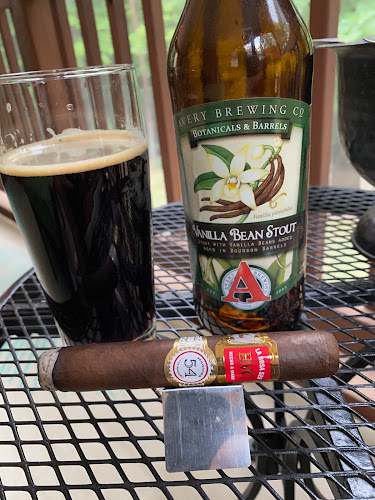 The Vanilla Bean Stout was from the brewery's 2016 bottling. The beer pours pitch black with a moderate beige head. The aroma was vanilla and chocolate. The flavor was a mildly sweet vanilla with added notes of milk chocolate and coffee. Despite the Bourbon barrel aging, there was little evidence of the labeled 11.5% ABV. Perhaps 4 years of sitting has mellowed those notes. The mouthfeel is light and creamy. It went down smoothly and quickly, despite the warm air of the deck.

The HVC La Rosa was a new cigar to me. Admittedly I don't recall ever hearing of the brand prior to receiving the cigar. This stick was part of the June package from My Cigar Pack. I've been enjoying this monthly club precisely for this reason — finding new cigars to try, and I've been pleased so far.

This Nicaraguan puro features a dark Jalapa Corojo wrapper over the Nicaraguan binder and fillers. The full bodied smoke's flavor was woody, with leather and espresso notes. There was also a moderate but not heavy bit of spiciness in the mix. It was an enjoyable smoke that balanced the sweetness of the stout well.

The beer and cigar were nursed along for just over an hour. With the deck fans blowing and some good tunes playing, I totally forgot about the heat as I wound down from the week and began looking forward to the rest of the weekend.