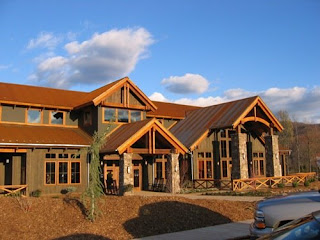 Friday marked the opening of the long-awaited Devils Backbone brewpub in Nelson County. Family commitments conflicted with the opening day, but I'll be visiting soon. Meanwhile I'll enjoy the reports from folks who did make the trip.
Brewer Jason Oliver created an impressive array of brews in time for the opening. Wintergreen Weiss, Ale of Fergus Scottish 60 Schilling, Eight Point IPA, Spike Pale Ale, and Black Rock Oatmeal Stout were reported to be available on Friday. Still in the tanks and ready soon are a Vienna Lager, a Helles lager and a Saison. Jason's descriptions of these beers can be read in this earlier post.

It sounds as if everyone had a good time. Some folks also visited nearby Starr Hill and Blue Mountain breweries. The Virginia Beer Trail is coming into fruition, one brewery at a time.

Thanks to Chuck Triplett for the use of the Devils Backbone photo.