This past weekend our son's school held its annual fund raising dinner and silent auction. As we've done for several years, for two schools, we donated a beer tasting event. This year's offering will include at least eight courses, for eight people, to be held this summer in our home. We'll pair up a selection of beers and foods, and enjoy a fun afternoon of culinary delights.

As the evening went on, it was obvious that one bidder had his sights set on winning the bidding. He was one of the attendees of last year's event and wanted to do it again. I saw him hovering frequently over the bid sheet to ensure he kept the top bid. At the end of the evening he let us know, with a big smile on his face, "I'll see you in July!" 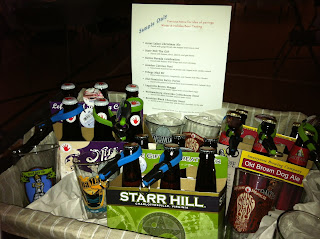 In order to give the winners something to take home that evening, we put together a basket of related treats; three six packs of craft beer, assorted glasses, and some bottle openers.

The auction bar offered a treat for the craft beer fan as well, one that I appreciated throughout the evening. The bar featured Blue & Gray beers! They served the brewery's Fred Red and Classic Lager on draft, as well as Stonewall Stout and Borman's Belgian Ale poured from fresh growlers. Not a factory beer in sight!

I'm excited just thinking about the upcoming tasting event, and we're already putting together the menu options. Of course, there will be lots of beer and menus to preview in the meantime.