Adventure Brewing celebrates their Grand Opening today, May 17. The brewery was actually open the past two evenings, and I was able to spend Friday evening at the brewery trying out the beer and chatting with the busy brewers.

Adventure Brewing Company is the dream-come-true for three home brewing friends, Tim Bornholtz, Stan Johnson and John Viarella. The trio have set up in a spacious industrial setting just a few turns off of I-95 (Stan told me that no more than "three turns from the highway" was one of the requirements they had for their location.) There is plenty of parking outside, and lots of space for seating, both inside and out. The interior's wood and stone theme is still under construction, but the 30 foot long wooden bar is the centerpiece. The wood came from a 200 year old Sycamore tree that once stood on the grounds of the Stafford Courthouse.

There were five beers on tap Friday evening; the four year-round beers and a specialty beer. I opted to start out with a flight. The five glasses are presented in heavy wooden "boat." I've seen some flimsy flight carriers that were at risk of losing the glasses, not so with this design! 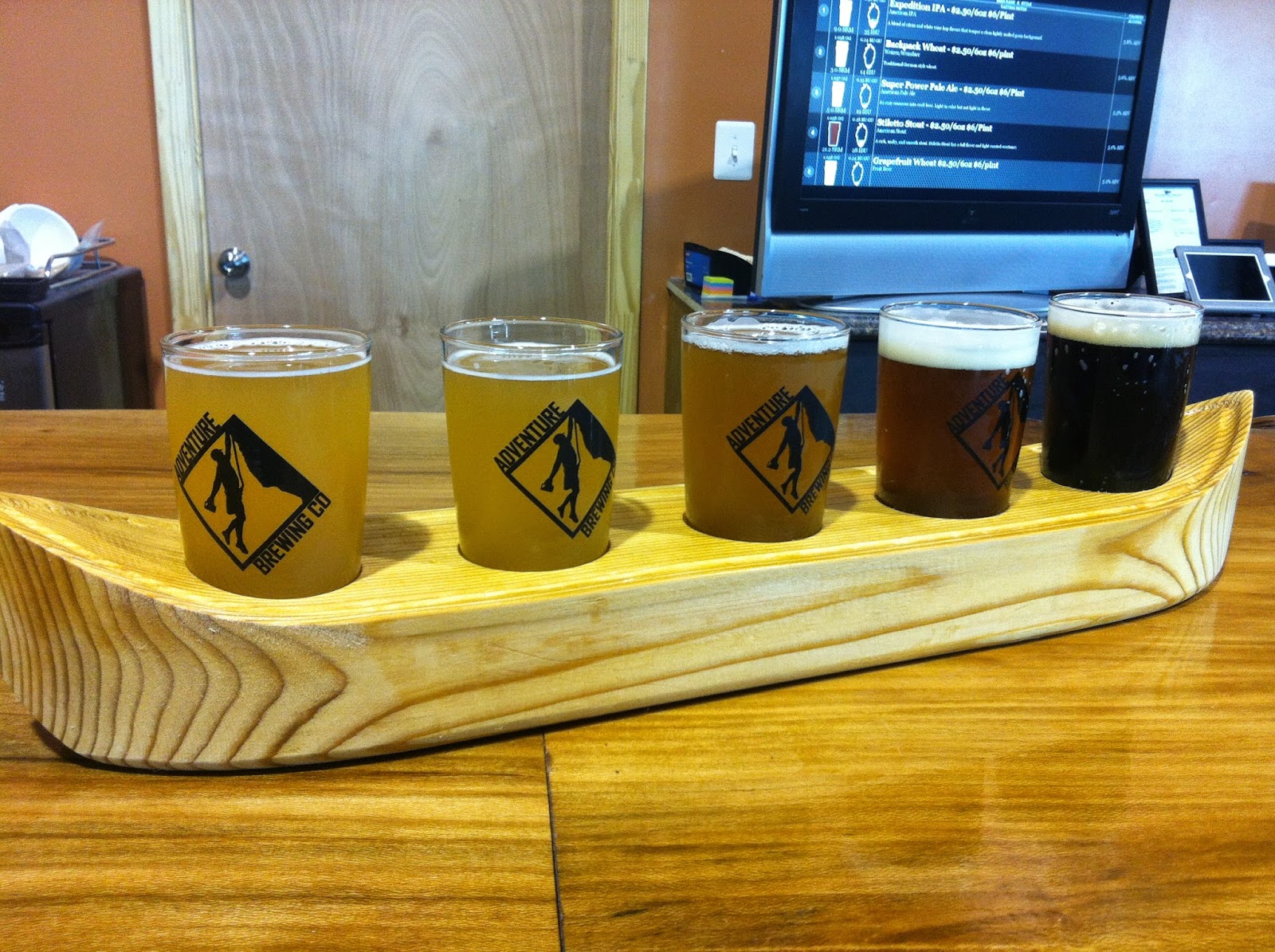 Going left to right, the first beer is the surprising Grapefruit Wheat. This one came from a pilot batch made with the brewery's regular Backpack Wheat with the addition of grapefruit. The citrus addition added a refreshing tartness to the beer. The grapefruit was prominent but not overwhelming. Being a small batch brew, this one was kicked before the evening was over. However given the reception of the beer, they'll brew more.

Next up was the Backpack Wheat. This is a very mild Hefeweizen with just a hint of banana and bready yeast. It'll make a good "gateway beer" for folks starting to move away from mass-produced beers like Blue Moon and into the craft beer world.

Super Power Pale Ale is the brewery's year round Pale Ale. This is a hybrid beer of sorts. The recipe is based on Adventure Power Pilsner, but since the brewery is not yet equipped for lagering, they "made it an ale." The beer has a slightly fruity flavor with a hint of citrus, and a chewy malt base. It's a different interpretation, but one that's quite tasty. 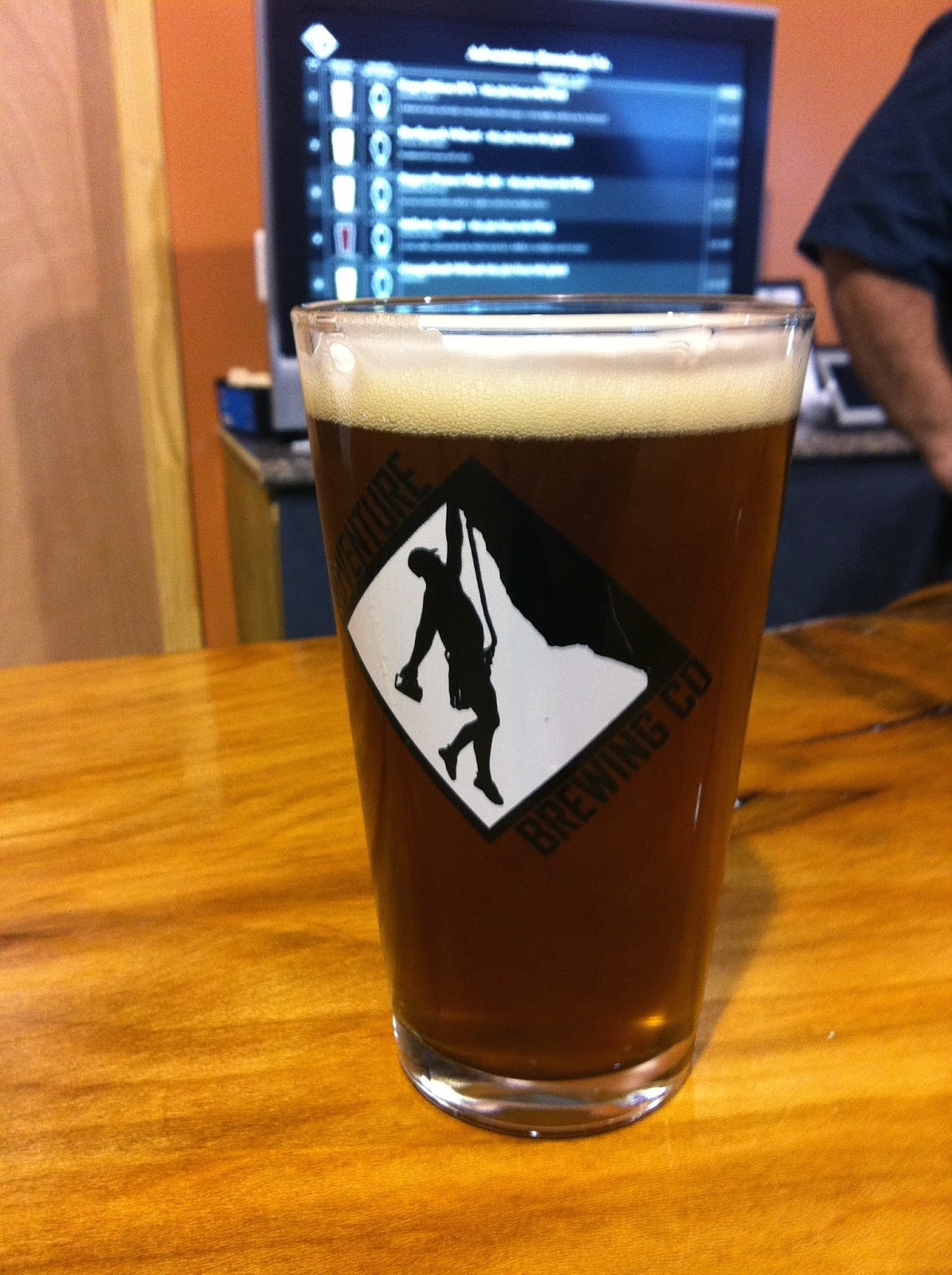 Next we came to Expedition IPA. Naturally, this was the beer I was most looking forward to trying. I wasn't disappointed. It's not a super bold beer that will scare off the less adventurous, but it's still got the kick to satisfy the hop head. The juicy citrus hops are well-balanced by rich malts. My favorite beer of the evening, I enjoyed a full glass (or two) after my tasting trial was complete.

Stiletto Stout was the last beer in the flight. This is a full-bodied Stout with a rich roasted malt flavor. The bitterness lingers in a dry finish. At around 7% ABV, this was the "biggest" beer on the menu. I predict this will be a favorite among Adventure's fans.

The brewery was surprisingly crowded. The "soft" opening was promoted through social media and word of mouth. I heard many folks commenting, "my friend told me you were open." With the doors open, some fans were enjoying the cool evening, playing on the corn hole boards set up outside. For myself, I spent a few hours at the bar, enjoying good fresh, local beer and chatting with other patrons. I asked folks their opinions of the beers, and although everyone had their favorites, there was a not a poor review to be heard.

There's no food currently served in the brewery, but plans are in the works to have food trucks on the premises. There will be several local vendors serving food for the Grand Opening. Adventure Brewing will be open on Thursday and Friday evenings 6:00PM to 10:00PM, Saturdays from Noon to 10:00PM and Sundays Noon until 6:00PM. They are located at 33 Perchwood Dr, Stafford, Virginia.  I'll see you there!