The Walnut Ridge Practical Shooters held their monthly USPSA match this past Saturday. The pleasant drive to the event was made even more enjoyable now that the sun's up early. Even the wildlife was up and about, as I counted deer, fox, turkeys, and a bald eagle among my sightings in the morning. The weather could not have been more pleasant for a morning of shooting,

As the Walnut Ridge match director is inclined to do, good use is made of the bay real estate. Stage 1 was the Classifier CM 13-05 "Tick Tock." This stage requires an unloaded gun table start. A mandatory reload is also made using a magazine from the table. The center top target is partially covered by a no-shoot sitting menacingly (or mockingly if you prefer.) I didn't hit any white, but did pull some of my side target hits into the C zones. It was a fun stage, and interestingly, my best stage finish of the day. Stage 2 "Rush," saw the shooter engaging both steel and paper targets, including the Classifier array, from around walls and through ports. 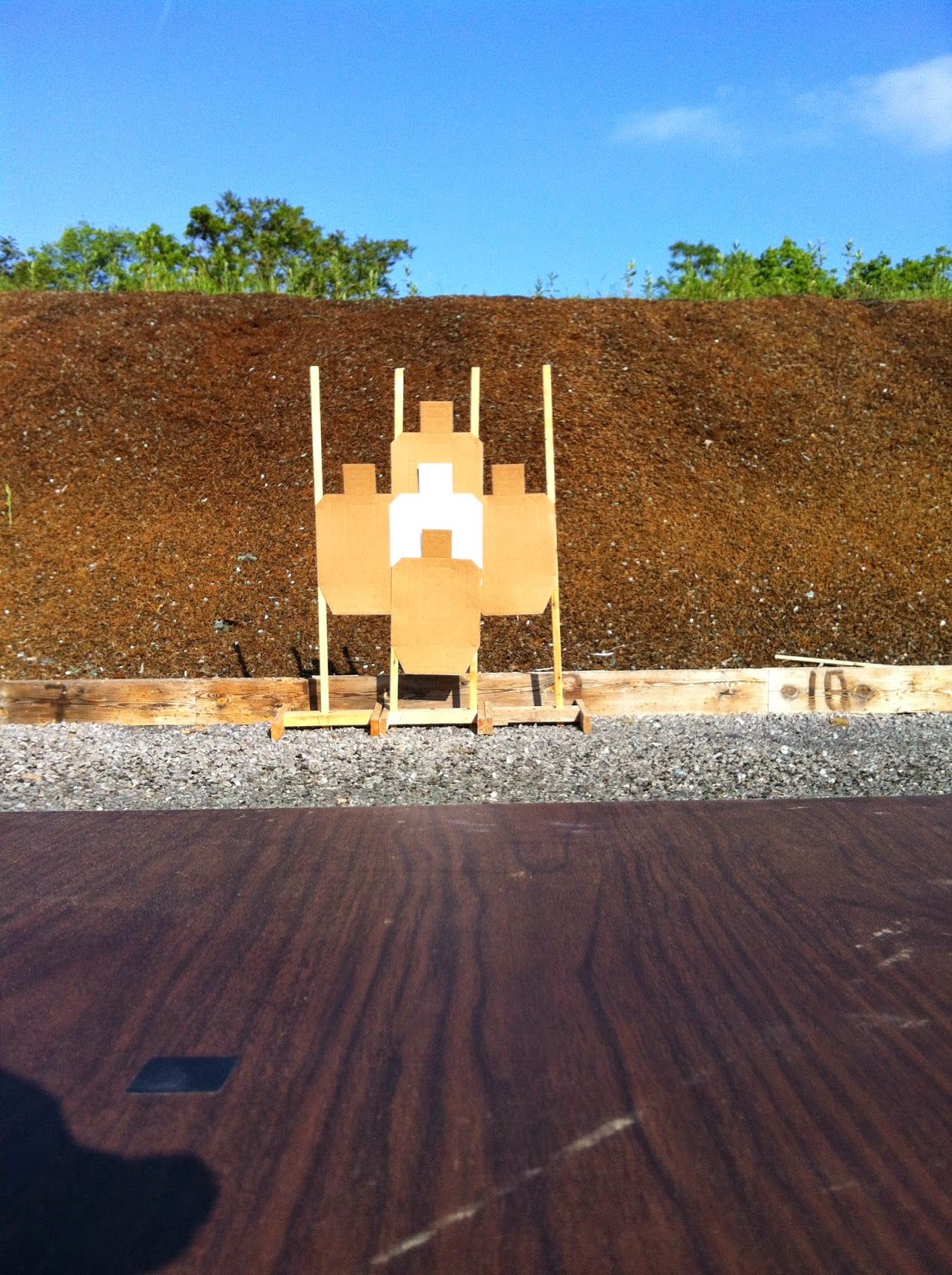 The next stage was labeled "Floyd" and included a Texas Star and a swinger among the falling steel and paper targets. A last minute change due to a drop turner malfunction added in the fun of a final 7 yard sprint to engage a lone target at point blank range. It was fun to see the may ways folks tried to engage that target on the move. And, yes, even at point blank range an A hit is not guaranteed. (I did get mine). Stage 4 "Halen" had four paper targets on either side with a plate rack and two falling poppers in the center. You had to shoot either the paper or steel, perform a mandatory reload, then engage the remaining array.

The final two stages in the last bay, like last month, were large field courses combined into one set up. In "Zeppelin" you engaged all the steel targets. For the final stage, "Maiden" all the targets were USPSA paper targets. What made these courses interesting, and challenging, were the numerous, and small, ports built into the solid walls through which many of the targets were engaged. In the words of another shooter, "Who gave them wood?' Unlike the popular snow fence walls, where you can see the targets as you come into position, the targets aren't visible through the solid walls, and in this case, were not visible except from very limited points looking through the ports. That the ports required bending, stooping, or even kneeling, added to the challenge. The odd-position shooting played havoc with my accuracy, not to mention my back, especially on the steel run. Overall, it was a very fun match. And, I had no misses or other penalties for the entire match. That's a win in my book! I always enjoy the way the folks at Walnut Ridge add little twists to the stages to create interesting and challenging courses of fire. I hadn't actually picked up on the naming pattern for the stages until I saw the match results posted that evening. Perhaps my subconscious mind had picked up on it though as I tuned into the 70's satellite radio station for the ride home.

Since this was also Memorial weekend, I thought it especially apropos to find these poppies blooming at the sides of the range berms. 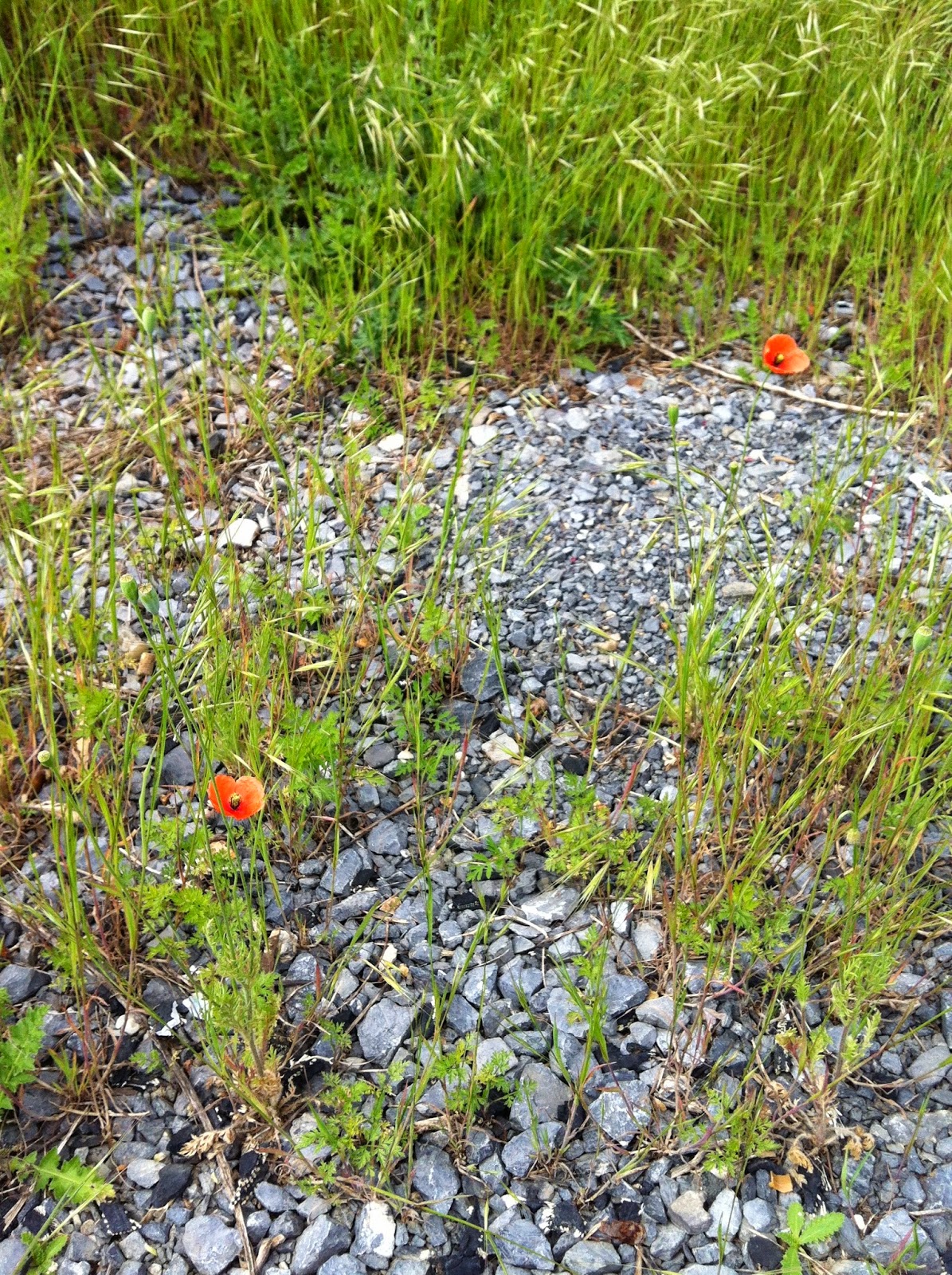