The Church Brew Works Comes to the Party 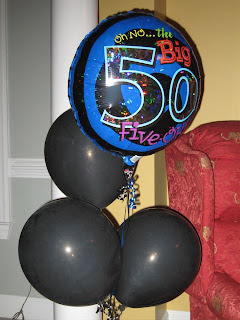 We finally officially celebrated my 50th birthday Friday evening, even though my actual birthday was last Friday. We had a few close friends over for an evening of food, beer and fun. I was happy to have our two parish Priests among our guests as well. There were numerous kids of varying ages in attendance who spent most of the evening in the basement playing Rockband, while the adults enjoyed classic rock and blues upstairs. Colleen, as usual, put together a fine spread of food, including some very thick hand-patted burgers, and my buddy Frank offered to man the grill. The burgers were excellent. Good show Frank!

Some of my friends travel often, and they are always on the lookout for interesting beers to bring back. Jerry recently made another of his frequent trips to North Carolina and brought along some Duck-Rabbit and Carolina Brewing beers. Frank walked in with two growlers from The Church Brew Works in Pittsburgh. Those growlers were filled with "M", a special release from this brewery:

Amarillo Black Ale
After eleven years I am proud to unveil our 1,000th batch of beer. The brew crew wanted to do something off the wall to help celebrate this momentous occasion. So I give to you M. This beer can not be categorized into one beer style. It incorporates two styles into one brew. The first style and base of the brew is a stout. You will notice that the beer is as dark as our oatmeal stout and has a rich full body. We achieved this with the addition of a significant amount of chocolate malt. The second style of beer incorporated into the brew is an IPA. If you smell the brew you will notice a significant hop aroma from the use of the Pacific Northwest hop Amarillo. We achieved this by dry hopping the brew with twenty pounds of Amarillo’s in the fermenter. Upon first sip you will taste espresso and chocolate similar to a good stout. After that the citrus hop bite kicks in and lingers on the palate through the finish like a good IPA. We went all out on this brew to reward our loyal customers through the years.

Frank's visit to Pittsburgh was timed just right to coincide with the release of "M" and we all enjoyed the opportunity to try this special brew. The brewer's description is spot on. The smell of the beer is West Coast IPA, but it looks for all the world like a fine dark stout. Both the stout and IPA flavors are present and compliment each other quite well. "M" was very smooth and easy to drink, and a bit unusual. I would be interested in trying out some of the brewery's other offerings.

Besides the above mentioned beers, Star Hill Jomo Lager and Pale Ale made appearances, as did Dominion Spring Buck. Later in the evening I brought out some Blue & Gray Minor Dementia Bourbon Barrel Imperial Stout. This was the first serving I've had of this from the bottle and it was just as good as it was direct from the keg. Frank and I also enjoyed some Sierra Nevada Bigfoot and Old Dominion Millennium later in the evening. 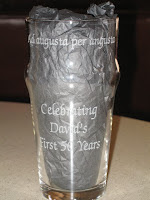 As a special treat Colleen had ordered 16 oz nonic pints engraved with "Ad augusta per angusta" and "Celebrating David's First Fifty Years". The latin phrase translates "To high places by narrow roads". Everyone got to keep their glass as a souvenir; party bags for grown ups. Of course, the evening was capped by the requisite gag gifts and over-the-hill remarks. It was all good natured and I truly enjoyed spending a fun-filled evening with family and close friends. How does it feel to be over 50? As I've answered many times recently, I barely feel a day older than I did yesterday.