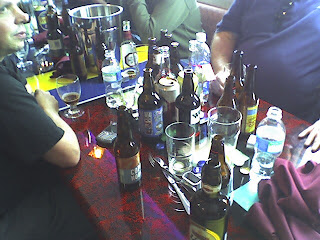 On Saturday, 20 local beer lovers met at Bangkok Boulevard for the March gathering of the Fredericksburg Area Brewing and Tasting Society. As usual, Chad and the folks at Bangkok Boulevard were most accommodating. Chad filled in a few missing items in the beer line up from the restaurant's stock. The theme for this month was English Ales; Ordinary Bitters, Premium Bitters, and Extra Special/Strong Bitters (ESB). In all, 26 commercial beers were sampled, along with 4 home brews brought in by members.

Bitters are low ABV beers, with a mild flavor profile of low bitterness balanced with malts. Many are session beers, under 4%ABV, allowing the drinker to enjoy several with friends without feeling the effects of the alcohol or numbing the taste buds. During our tasting session, a number of the beers elicited comments such as "There's nothing there." Of course, we weren't there to enjoy multiple pints of the beer, so perhaps we weren't imbibing in the proper manner for the style. One thing that I believe may have contributed to the comments is we're slowing coming out of Winter here and many of us have spent the last several months enjoying decidedly non-sessionable beers such as Imperial Stouts, DIPA's, Barleywines. Could be we're just spoiled. There were quite a few excellent beers tasted. Perhaps Summer is when we should be focusing on these beers.

In the Ordinary Bitters, I believe we only had one on the list, Tetley's English Ale. I had this one for the first time just week or so ago, and did enjoy it. The 2 ounce sample yesterday seemed lacking, which points back to my theory noted above that these beers are properly enjoyed in larger quantities. There were a number of standouts yesterday. Coniston Bluebird Bitter was notable among the Premium Bitters, as was the classic Fuller's London Pride.

Moving on to the ESB's, Morland Old Speckled Hen was poured from a nitro-widget can and was quite enjoyable. For comparison, we followed that with the same beer from a clear glass bottle. That beer was light struck and not very enjoyable. That brings me to something else I noted from the session. We seemed to be hitting a higher number of off-flavor beers. Whenever you sit down and try 20-25 different beers, the odds are that one or two will have been mishandled in some way. (Add to that there are a number folks in the group especially adept at picking out these off flavors.) The majority of the beers we sampled were imports and travelling long distances gives more opportunity for mistreatment. There were also a number of beers bottled in clear glass. As this isn't a style that's overly popular with many Americans, stocks may sit on the shelf longer. Off flavors may be more noticeable in these mild flavored beers. Whatever the reason, our dump buckets filled faster than usual.

Daleside Ripon Jewel Ale was another memorable beer. A nice combination of bready malt and bitter hops led me to make a note to look for this in the future. Two other classics from Fuller's, the ESB and Fuller's 1845 were both impressive. We also sampled a Lakefront Organic ESB, the same beer I reviewed for this month's session. Unfortunately this batch was infected. The beers I have at home are from a different batch according the labels and didn't have this issue.

Chuck Triplett, frequent contributor to DC-Beer and the realbeer.com forums, and Ray Johnson, organizer of the Blue Gray Breweriana show, drove down from Northern Virginia for the meeting. Chuck brought with him a couple growlers of beers we aren't able to get in this area. The first was Bill Madden's ESB from Vintage 50 in Leesburg. This ESB was probably the hit of the day. Unfortunately by this point I was enjoying good conversation with friends and was not taking notes, so I have nothing specific to say other than it was well-received and enjoyed. Bill has a well-deserved reputation for fine beers and this was no exception. We also were treated to the "Bitter American" from Old Dominion brewery. Recently some local folks have taken to making disparaging remarks about Old Dominion based on the partial ownership by Anheuser-Bush, and some recent changes in the beer lineup and personnel at the brewery. However, from messages posted on DC-Beer, and from tasting this beer, OD seems to be on the right track.

Home brewed beer is welcome at any meeting. This afternoon we were treated to four examples. Again no notes, only memory. A Rauch Dopplebock from Lyle was enjoyed first. Several of the members had tried this at the Blue Gray show last month and spoke highly of it. You need to be a smoked beer fan to enjoy this one. I am, and I did. Dave brought in more of the smoked pumpkin beer he's brought to a couple of meetings recently to get opinions on how the beer holds up over time. The smokiness has decreased, allowing more honey flavors to come through. Two members brought in porters. Rick's enjoyable beer was labeled "HSP" for Hop Shortage Porter. Scott's porter was also pleasing. He remarked that he didn't think the ABV was as high as he was hoping for, though the beer still had plenty of flavor.

As usual the gathering made for a very enjoyable afternoon. I tried a number of new beers and met a couple of new friends. What else could one ask from an afternoon devoted to beer? Upon my return home I learned that we had just recently lost power, an outage that lasted 6 hours. We had evening plans for dinner with friends at a neighbor's house. Fortunately most of the food had been cooked by the time the power went out, and the gas stove still worked. It turned out to be an enjoyable evening despite the hum of a generator in the background.

The next FABTS meeting is planned for April 12, at Kybecca. The theme for the month will be "bocks" of any type; Doppelbock, Eisbock, Maibock, Weizenbock are all included. Be sure to check the FABTS web site for more details. Hope to see you there!