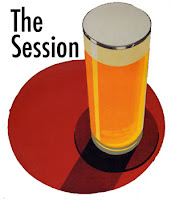 The March edition of The Session is hosted by Chris O'Brien over at The Beer Activist. Chris has chosen the theme of "Organic Beer" for us to ponder this month. A quick search made it apparent that none of my regional breweries produce any organic beers. Clipper City Brewing in Baltimore will be releasing its Oxford Organic Ales line in April. However, that is not soon enough for this Session.

A friend returned from a recent trip to North Carolina with a six pack of Lakefront Brewery Organic ESB and I decided to focus on that for the Session this month. The beer was brewed in Milwaukee, Wisconsin and purchased in Raleigh, North Carolina. I am immediately struck by the irony of brewing an environmentally friendly beer and then shipping it 900 miles, although that is certainly a shorter distance than many commercial brews are shipped. Lakefront Organic ESB is brewed with 100% certified organic ingredients. Information on the brewery's organic production can be found here. When the USDA was recently pushed by large breweries to allow non-organic hops in organic beer, Lakefront Brewery lobbied against the change. 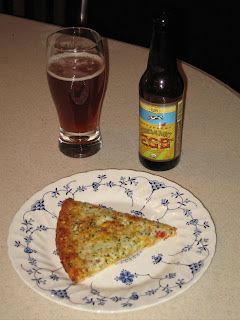 Lakefront Organic ESB pours a slightly hazy amber-copper color. There's a thin off-white head that drops quickly leaving a thin ring, with very little lacing. The malt aroma is strong with bread and caramel notes. I don't detect much in the way of hops in the aroma. The taste is yeasty malt, with just a touch of fruitiness. The bitterness is on the low side, though there seems to be more hop bitterness left in the aftertaste than is experienced initially. The mouthfeel is light and smooth. This was an easy drinking beer without any strong flavor profile. It was on the low side of Extra Special Bitter, but a very nice mid-afternoon treat. I drank the Lakefront ESB to spice up a quick lunch of frozen pizza. And for that it served quite well. The low initial bitterness level was actually enhanced when paired with the pizza.

Was I expecting a flavor identifiable as organic? I probably subconsciously expected some organic sense to the beer, much like those organic breakfast cereals that end up tasting like milk-soaked cardboard. Thankfully, the taste profile was just beer, no cardboard.

Be sure to visit the Session Roundup at The Beer Activist to see a summary of all this month's posts.