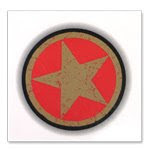 When Starr Hill Brewery announced last December that they had signed a distribution agreement with Anheuser-Busch, brewer Mark Thompson let me know that we could expect to see his beers in Fredericksburg by May. It's only March but Starr Hill has arrived on store shelves. I've heard only good reviews of Starr Hill brews and I'm excited to be able to get them locally. Despite the brewery being located less than a 2 hour drive away, the beer had very limited distribution until recently and didn't make it over to Fredericksburg. Last week I picked up a six pack each of the Pale Ale and the Jomo Lager.

I tried out the Starr Hill Pale Ale this weekend. It pours a copper-orange color with an amazingly thick head that stands well over the rim of the glass. You could almost mold the foam into shapes! Copious amounts of sticky lacing is left behind has the head slowly drops. The aroma is reserved, with faint citrus hops over light malt. The taste is full of grapefruit zestiness, along with a toasted malt backing. There’s a lingering grassy hop bitterness left in the aftertaste. This is an easy to drink beer with a moderately strong but not over-powering flavor profile. I can see coming back to this one regularly. The Pale Ale would drink well on a warm summer afternoon, paired perhaps with some spicy nachos. I'm looking forward to trying out the Jomo Lager next. Starr Hill's Amber Ale is also on local shelves. It's great to see another Virginia brewery getting wider distribution. I'm hoping some of the Starr Hill seasonal beers will also be candidates for wider distribution.