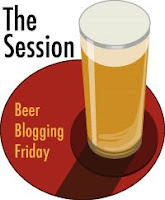 The January edition of The Session is being coordinated by Brewmiker (a.k.a. Beerme) at the Beer and Firkins blog. The theme is The New Year: What will you miss about 2008 and what do you expect will excite you most in 2009, in the "Beer World"?

Tough topic. I already did the requisite end of year post. I prefer to look forward to what's coming up rather than lament what's gone by. However, in the Old Dominion we are witnessing a passing of sorts. One stalwart Virginia brewery prepares to relocate out of the state, while another stands poised to claim their spot as Virginia's benchmark brewery.

It's old news now that Old Dominion Brewery plans to close the Ashburn, Virginia facility and relocate to Dover, Delaware. Old Dominion was established in 1989 and after 20 years was the brewery that came to mind when one thought of Virginia breweries. It's not the beers I'll miss, it's being able to associate Old Dominion Brewery with the Old Dominion. I do expect to the quality and availability of the beers to remain, it's the Virginia connection that will be missing. I have seen signs that under the new ownership distribution might actually be improved.

But enough of the old, it's in with the new. Starr Hill Brewery was established in 1999 in Charlottesville, Virginia and is now located in nearby Crozet. That same year they won a Gold medal (for Dark Starr Stout) at the Great American Beer Festival. Despite earning recognition at festivals almost every year, the breweries beers were limited in distribution. Then, in late 2007 Mark Thompson signed a distribution agreement with Anheuser-Busch. By the Spring of this year, the beers were available in Fredericksburg, and their range continues to expand.

What does this mean looking forward to 2009? It is my belief that Starr Hill is poised to become the new patriarch of Virginia breweries. All of their year-round beers have won multiple medals. They've also won a medal at the GABF for The Love seasonal, and also medaled in the Pro-Am competition with Smoke Out. Talk about putting a shine on the star! (Oooh, sorry.) Wider distribution, award winning beers — it all bodes well for Virginia's reputation as a beer state.

In addition to Starr Hill, there are numerous breweries making their mark in Virginia, and even more are soon to open. (Blue Mountain Brewery in Afton, VA is another up-and-comer worth watching.) It's a great time to be a beer fan in Virginia. I look forward to enjoying more Virginia beers in 2009 and sharing those experiences here.
Update, January 3: Brewmiker has posted the Session roundup here.