A Visit From The Magi 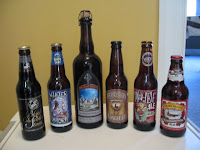 We hosted our annual Epiphany party this weekend. Good friends gathered, along with good food and good beer, for an evening of cheer. Colleen prepared a wonderful selection of both savory and sweet delights and I selected a variety of beers to offer. The beer selection was comprised of several seasonal releases; Brooklyn Black Chocolate Stout, Clipper City Winter Storm, Sierra Nevada Celebration, and Tröegs Mad Elf. As a special treat I also had a few bottles of Lost Abbey Gift of the Magi. I set out some Old Dominion Lager for those guests that were interested in less extreme beer. That way I could offer them a beer style they are familiar with, and at the same time introduce some flavor to their palates. 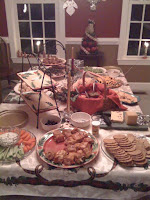 Gift of the Magi is a holiday seasonal from Lost Abbey. I had ordered three bottles from an online merchant last month specifically for this party. I was sorely tempted to open one in the past few weeks but I managed to resist that temptation. Early in the evening we started pouring the Gift of the Magi. We served the beer in six-ounce tasting glasses. This was a good way to let those interested in trying the beer do so, without risking much waste, and folks could refill their glasses as desired.

The beer pours a cloudy burnt-orange color. The yeast in the bottles may have gotten a bit shaken up while the bottles were being passed around by folks looking at the label. After a few refills I had a substantial amount of sediment left at the bottom of my glass. There was a moderate amount of head produced even with the small pours. The aroma has an interesting spicy profile mixed with some citrus. The beer has frankincense and myrrh added to it and I think that is what gives it the unique aroma. The flavor is as unique as the aroma. The peppery spices are prominent with just a bit of yeast coming through. There are also some bitter hops noted. The beer is bottle conditioned with brettomyces but those flavors are subdued. 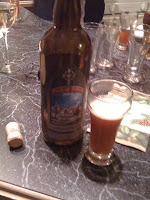 I found Gift of the Magi to be a uniquely flavored beer and I was not let down at the end of my wait to try it out. Everyone who tried the beer seemed to enjoy it and a number of folks had more than one glass. In his own epiphany of sorts, one of our friends who usually prefers flavorless macro-lagers was very impressed with the Lost Abbey beer and enjoyed several glasses.

The evening was quite enjoyable. Lots of beer and food was consumed. Before the evening was over I also brought out some 2007 Samichlaus. I felt fortunate to introduce several folks to some new beers that evening. That's always a bonus to any gathering. Spending the evening enjoying a variety of beer with good friends was an exceptional finish to the Christmas season.