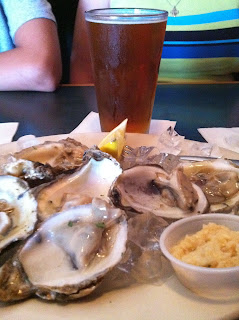 While visiting the Outer Banks I was determined to partake in some local seafood. For dinner one evening we decided to try Mulligan's Raw Bar & Grill. I knew I'd get my seafood fix, but the beer menu wasn't exceptionally intriguing for this craft beer fan. Then our waiter informed us they just added "an IPA from a local brewery." After checking, he informed us it was Flagship IPA from Carolina Brewery. That settled both my food and beer selections.

Carolina Brewery Flagship IPA pours a dark copper-orange color. The carbonation was quite low and the head practically non-existent. The aroma was that of resiny hops, but faint. The flavor starts out slightly sweet, followed by a rich citrus rind bitterness. The bitter flavors linger for quite a while on the palate. It was serendipitous that we visited just in time to find this enjoyable IPA newly tapped at the restaurant.

And the seafood? Flagship IPA went very nicely with my appetizer of oysters on the half shell. The oysters were followed by an equally enjoyable soft sell crab platter.