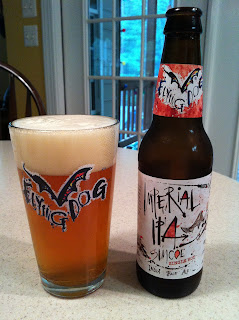 Flying Dog Single Hop Imperial IPA (Simcoe) is part of the brewery's Single Hop Series. These limited beers are designed to showcase only a single hop. Other beers in the series feature El Dorado and Centennial hops.

The beer pours a hazy golden orange with a thick off-white head. The aroma of citrus from the Simcoe hops is immediately noticeable after the pour. The hop-lover in me is salivating at this point. Bold citrus and pine flavors are immediately apparent. There is bit of honey sweetness hiding in there as well. But, this beer is all about hops. Big, bold, in your face, yet still quite drinkable. There's a lingering bitterness and finish is dry. The 10% ABV is not readily apparent in the flavor, so enjoy carefully. This is one of those beers that goes down fast, with a surprise later if you're not careful!

Flying Dog Single Hop Imperial IPA (Simcoe) is available on draft and in a limited supply of 12 ounce bottles. The bottles are only available as part of a 12-bottle variety pack of Flying Dog beers. While I'd prefer to be able to go out and buy a four, or 6-pack of this one, having a few bottles of Doggie Style Pale Ale, Snake Dog IPA, and Raging Bitch Belgian-Style IPA in the house isn't exactly a bad thing either.
FTC Wonk Notice: Flying Dog sent me an unsolicited bottle of Flying Dog Single Hop Imperial IPA. It is through my own free will that I enjoyed the beer. No compensation was received for its review.