We took a trip to DC this weekend to see the Evening Parade at Marine Barracks Washington. The Barracks, also known as "8th and I", was established in 1801. It is called the "oldest Post of the Corps." The Evening Parade consists of appearances by the U.S. Marine Band, the U.S. Marine Drum and Bugle Corps, along with Alpha and Bravo Companies, which make up the ceremonial infantry units of Marine Barracks Washington. Alpha Company includes the Silent Drill Platoon. 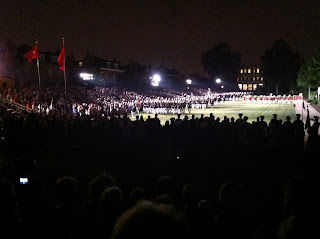 The Evening Parade is held every Friday during the summer. And although free, the tickets are hard to come by, as they are reserved almost as soon as they become available. Thanks to the persistent efforts of a friend we were privileged to attend last Friday's event. After driving to Northern VA to meet up with the ticket bearer we took a long subway ride into the city. After dinner at a local restaurant and pub, we made our way over to the Marine Barracks. The streets around the Barracks were filled with uniformed Marines and members of other branches of the Armed Forces. We even saw uniformed personnel from other countries. Also attending were many veterans groups and other heroes sponsored by the Wounded Warrior Project. The current Director of the FBI, Robert Mueller, was introduced as a guest of honor. 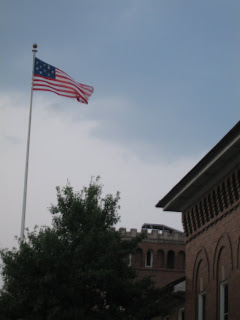 It wasn't long after we were seated that we noticed the U.S. flag flying over the Barracks was different. This flag consists of 15 stars and 15 stripes. (Video.) This is the flag of our Country as it appeared from 1795-1818. Also known as the "Star Spangled Banner Flag", the Marines are permitted to fly this version of the flag on the Fridays of the Evening Parade. The only other location allowed to fly this flag is Fort McHenry in Baltimore.

The Marines are justifiably proud of the historical significance of both the location and the mission of Marine Barracks Washington. The Evening Parade is an impressive display of precision and pageantry. I encourage anyone who is able to make the effort experience this historic, and patriotic event.