When the Beer Planets Align 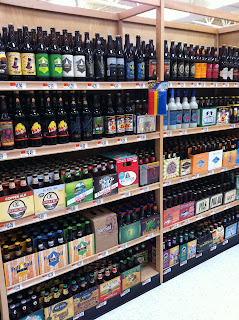 Some days it seems that everything just falls together. A recent string of events had me wondering if perhaps I should by a lottery ticket. First, a couple of background bits to set things up. Recently I lamented about the recent absence of Clipper City and other beers in the Fredericksburg area. Also, last week I picked up the latest issue of Mid-Atlantic Brewing News. In it I read how Bear Republic Racer 5 was a "delicious profitable mistake" created when the brewers added too many hops to a batch of their house IPA. This invoked memories of enjoying this big IPA on draft many times in the past. Now, on with this tale...

Recently while shopping at our local chain grocery store, I remarked to Colleen that I was going to check the beer aisle to see if anything inspired me, though I wasn't optimistic. As I rounded the corner and passed a rack of singles available for mix-and-match purchase, I spied several bottles of Clipper City Loose Cannon and Small Craft Warning. I laughed and thought, "Wow, those must be left over." Then I turned and spied an entirely new section of craft beers on the shelves. There, at the bottom were full six-packs of Clipper City beers. "Look at that!", I said to Colleen, who was by now also perusing this new display. I then spied some bombers of Racer 5 on the shelf. I remarked that I liked that beer a lot, but had only ever had it on draft.  I wished aloud that it was available in six-packs, rather than the 22 ounce bottles. Then, looking further down the shelf, that wish came true. There is was in that more consumable package as well.

How quickly a routine trip to the grocery store turned into a near stream-of-thought experience. A newly stocked beer section, an old favorite beer making a return, and a new bottle selection added to the home fridge. Life is good.