"So, when you meet (in fight Jihad in Allah's Cause), those who disbelieve smite at their necks till when you have killed and wounded many of them, then bind a bond firmly (on them, i.e. take them as captives). Thereafter (is the time) either for generosity (i.e. free them without ransom), or ransom (according to what benefits Islam), until the war lays down its burden. Thus [you are ordered by Allah to continue in carrying out Jihad against the disbelievers till they embrace Islam (i.e. are saved from the punishment in the Hell-fire) or at least come under your protection], but if it had been Allah's Will, He Himself could certainly have punished them (without you). But (He lets you fight), in order to test you, some with others. But those who are killed in the Way of Allah, He will never let their deeds be lost," --Surah 47, 4*
Begets this: 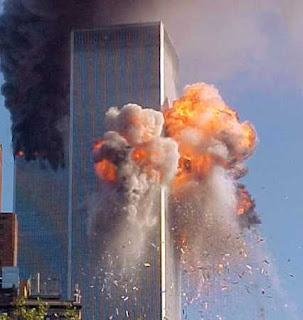 Today we pause to remember the innocent victims slaughtered that day 10 years ago. May God grant them eternal peace in His presence.