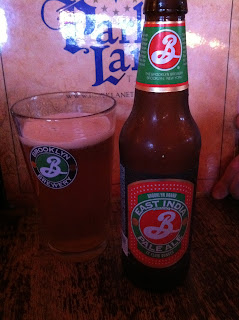 Wednesday is the Steal the Glass night at Park Lane Pub. This week we stopped in for dinner with family and a friend. I was pretty excited when I saw the picture of a nice looking nonic pint the restaurant had posted to their Facebook page to promote the featured brewery, Brooklyn Brewery. Alas, upon our arrival I found out that the glass was actually a standard shaker pint.  Oh well, we were there for the food and beer anyway. (Park Lane later removed the post and replaced it with a photo of the actual glass they were using.)

Three Brooklyn beers were offered; Local 1, Lager, and East India Pale Ale. Our server informed us that the Local 1 came with two glasses, "like sharing a bottle of wine" he said. While I do enjoy Local 1, our plans called for attending a lecture after dinner, so I opted for a "smaller" beer, the East India Pale Ale.

The server brought my drink, I realized I had made an assumption I should not have. She had in her hands my Brooklyn glass, and a bottle of the beer. When describing the beers offered, the server had mentioned the large bottles of Local 1, but didn't mention the other beers were in bottles. Being in a pub, it didn't even cross my mind. "Oh, it's in a bottle." I remarked. "Of course, that's how we can offer so many," was the reply. Okay, whatever, it's a good beer. I poured my beer, which didn't fill the glass, of course.

Brooklyn East India Pale Ale pours a clear amber color with a thin head. There's not much of an aroma, mostly some mild earthy and fruit notes. The flavor was much stronger than indicated by the smell. The beer has a nice caramel sweetness, followed by a fairly intense citrus rind bitterness. That bitter hop flavor lingers for a long time.

Despite a couple of initial disappointments, I enjoyed my dinner. The beer was good, the Pub Club sandwich satisfying, and of course the enjoyable company. We had a great time talking and laughing, including some joking about the glass mixup and the bottled beer surprise. Afterwards we enjoyed the lecture, followed by a stop for ice cream at Carl's. On the way home, it hit me. "Where's my glass?" Sitting on the table back at the restaurant, that's where. Oh well. At least it wasn't the nonic pint glass!