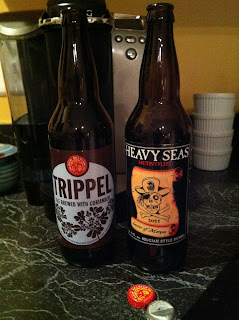 This is perhaps my favorite time of the year. Even though the days are slowly getting shorter, it's still light long enough into the evenings that we can get in some play time after work, yet the temperatures are cooler than they were just a few weeks ago. Recently we took advantage of these seasonal factors after work and loaded up the car to head to the range for a couple of hours of shooting. After a cortisone shot earlier this week, I was even able to move around and do some shooting on the move.

Returning home and stowing the gear, we decide to relax with a beer before firing up the grill. I opened up a bottle of Heavy Seas Letter of Marque that we recently brought back from North Carolina. I've been looking forward to this! The 2011 version of this beer is a Belgian style Dubbel. The beer pours a lovely dark caramel color, with a moderately thick beige head. As I brought the glasses over to the counter to where we were sitting, I could smell the delightful aroma of sweet caramel and dark fruit. The flavor follows the aroma quite nicely with subtle plum sweetness and bready yeast. The finish is clean and the 8% ABV is well-masked. I enjoyed this one very much and would certainly pick up a few more bottles if I came across them.

We all enjoyed that Belgian so much our appetites were wetted for another. A trip to the beer fridge revealed a bottle of New Belgium Trippel that I had picked up just this week. (New Belgian beers are now available in Virginia, and my local chain grocery store had a nice display.) If this had been a planned tasting session, I would have served the Trippel before the Dubel, but this was a serendipitous evening.

The New Belgian version of the Belgian Tripel poured a bright golden color with a thin head. The aroma was sweet with some mild alcohol detected. The flavor was mildly sweet with banana and yeast notes. Some spices was detected but they were not prominent. The alcohol is more noticeable than experienced with the first beer of the evening.

By now the burgers were done and we finished off our glasses and the impromptu Belgian beer evening. Though unplanned, it was quite enjoyable. If I had been scripting the meal, I probably would have served the Dubbel with the burgers, and then possibly enjoyed the Tripel with the lemon pound cake Colleen had baked for dessert. But then again, no one had any complaints about the dinner as it unfolded!