The USPSA Area 8 Championship was held September 1- 4 in Fredericksburg. 310 shooters converged to compete on ten challenging and fun courses of fire. I shot the match over two days - completing 5 stages Saturday morning and 5 on Sunday morning. While I did not shoot as well as I had hoped, I had a great time. How many other sports allow the amateur enthusiast to play on the same field, at the same time, as those who are at the top of the sport? The match was extremely well-organized and ran quite smoothly, as least from the competitor's point of view. The Match Director, RO's, volunteers, and everyone involved are to be congratulated for putting on a successful match. Area 8 has a well-deserved reputation for putting on an excellent match, and they sure didn't disappoint this year.

The weather Saturday morning was very pleasant with slightly overcast skies and comfortable temperatures. Our squad began the day on Stage 8, a classic 30 round field course. This was a great warmup to get the day started. Stage 9 provided a couple a couple of swingers activated by hitting steel poppers on opposite sides of the stage. This required the shooter to run back and forth to activate then engage the targets. Stage 10 was where I returned my best performance of the weekend. Four shooting positions, and three reloads, made for a quick run. I happened to be able to watch Grand Master Travis Thomasie shoot this particular stage on Friday - maybe that gave me some inspiration!

The most challenging stage for me was Stage 1, which contained two Texas Stars. I think I've now doubled the number of times I've shot these rotating target arrays. The final course of fire on Saturday, Stage 2, was unique, and certainly nothing I've ever done before. The shooter was strapped into a seat with wheels that rode on rails, and pulled himself forward while shooting at targets on either side. It's stages like this that make regional matches so interesting and so much fun.

For the second day of shooting, on Sunday morning, the weather was a warmer and more humid. Stages 3 and 4 required a bit of memory work to make sure all targets were engaged. Nothing extremely complicated, but I've struggled in the past with keeping my plan straight (once that buzzer goes off!) and I was pleased to work on that a little more. Stage 5, the "shaky bridge" stage gave us another out-of-the-ordinary challenge. The shooter was forced to engage some targets while standing on a suspended platform. I was pretty pleased with how I did on that one, although I did mange to put one shot through the edge of a wall, costing me a miss and a penalty. Looking at that wall, I wasn't the only shooter to have done so! Stage 6 required strong hand only and weak hand only shooting. These are skills that I try to practice frequently - and need to do so even more. The final stage of the match was another classic "shoot 'em as you see 'em" course with both steel and paper targets.

Just two weeks ago I was doubting that I'd even be able shoot this match due to a knee injury so I was very happy that I did get to participate. These regional matches are challenging but a lot of fun at the same time. My overall finish was low in the rankings, but when I compare my hit factors and point percentages I'm pretty much inline with my current classification. There was also marked improvement from my finish in last year's Area 8 match. I was pleased with how I did in some areas, and learned some things I need to work on too. But most importantly, it was a lot of fun to shoot a challenging match with a great bunch of shooters. And that's the whole reason for going anyway. 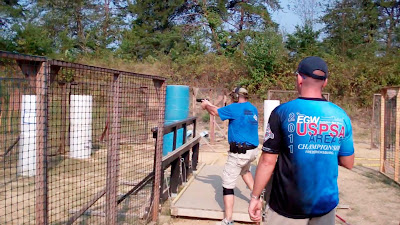