The Lines Are Drawn

There's a battle over religious freedom brewing in the United States. Currently the aggressors are focusing on the Catholic faithful. However, people of all faiths should be concerned. While the opening volley happens to focus on the Catholic church, this is ultimately an attack on all Americans and on the freedoms we treasure. Russell Shaw opined last year that religious persecution in the United States "will be a tight-lipped campaign of secularist inspiration in which the coercive power of the state is brought to bear on church-related institutions to act against conscience or go out of business."

The declaration by President Barack Hussein Obama ordering the Catholic Church to violate its fundamental beliefs was only the first wave of an assault that shows no sign of letting up. The president's declaration was met, thankfully, by indignation by the Church in the U.S. Over most of the country last weekend, Catholics heard statements from their Bishops, read during Mass, condemning this attack. Here in the Arlington Diocese, we heard a statement from Bishop Loverde.

Archbishop Timothy Broglio of the Archdiocese of Military Services also issued a statement to be read by chaplains in the U.S. Armed Forces. In an unmitigated attack on religious freedom, the Army’s Office of the Chief of Chaplains told Catholic chaplains they could not read the statement. Think about that for a moment — a branch of the United States military ordering the silencing of the Catholic chaplains. Not only is the Obama administration telling the Church it must implement polices that violate the First Amendment and that are directly contrary to teachings of the faith, the administration is now invading the sanctuary by trying to control what is preached from the pulpit. If a politician opens a meeting with a prayer, the left, and the ACLU, get their knickers all in a twist. Yet when the federal government tries to control what a Priest says from the pulpit the silence is deafening.

The freedom of religion in the U.S. was once sacrosanct. No more. This administration, aided by the leftist media, has drawn a line in the sand and is daring the faithful to cross it. 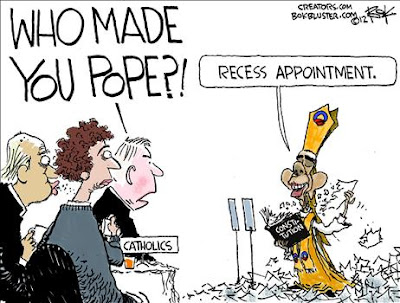 This is not the first time the Church has faced a state-sponsored war. If this battle is to be won, it's time for the 25% of Americans who claim to be Catholic to stand up and be Catholic. Stop supporting heretical "catholics" like Biden, Pelosi and Sebelius. Learn what the Catholic Church really teaches and speak out. We must not stand idly by while the Church is attacked, and ultimately freedom is destroyed. Remember the words of Pope Pius XI, "Let us thank God that he makes us live among the present problems; it is no longer permitted to anyone to be mediocre."

Email ThisBlogThis!Share to TwitterShare to FacebookShare to Pinterest
Links to Related Musings: Catholicism, Decline of the US, Faith, Freedom, Freedom of Speech, FUBO, HHS Mandate, obama, Obamacare, Politics, The Constitution