Aggressive Denizen of the Range

We met this gal (?) guarding the berm at the range today. Her shell was about 12" end to end. Unhappy with our arrival, she had no hesitation in advancing aggressively as we approached. 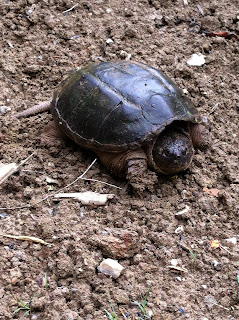 Wikipedia accurately notes "Common snappers are noted for their belligerent disposition when out of the water." She was eventually moved. I won't be surprised to see young ones exiting the berm later this year.

Email ThisBlogThis!Share to TwitterShare to FacebookShare to Pinterest
Links to Related Musings: Nature