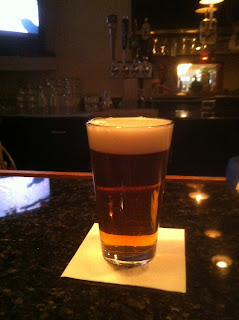 As mentioned earlier I spent this weekend inside a hotel in Williamsburg. It was all for a good cause, even if it did conflict with my desire to participate in the VA/MD USPSA Sectional. I was at a convention with a lot of outstanding people who are devoted to doing good works and helping folks in need. It was quite an inspiring weekend.

During one break, I managed to sneak into the hotel pub for a quick afternoon pint. The usual suspects in the factory beer style were available, the lone craft beer offering being Williamsburg AleWerks Cheaspeake Pale Ale. It was available both on draught and in the bottle.

Chesapeake Pale Ale pours a clear, bright amber color with a moderate frothy head.  The citrus and earthy aromas are easily detected. I found the aroma to be a bit more intense than many pale ales I've tried. The predominant flavor is a juicy, citrus tang that's balanced with a mild bitterness. The dry finish brings ever so mild sweet, malt notes.

Overall, I enjoyed this new-to-me pale ale quite a bit. Given the rest of the available beer options, I was quite happy to find the Chesapeake Pale Ale. I wasn't surprised that Williamsburg Alewerks produced such an enjoyable beer, but I was surprised that I don't recall ever having it previously.

Yes, I did get back for a second round.