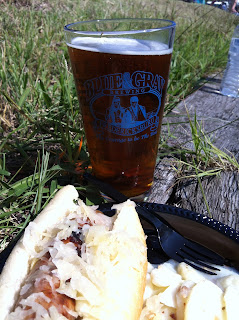 While Colleen was off this weekend enjoying time with friends from college, I hit the Blue & Gray Oktoberfest with my son for lunch on Saturday. When I first mentioned the idea to him, he replied "Sounds like fun." I raised him right don't you know?

We arrived before the lunch line got too long, but I headed for the beer wagon first for my much anticipated glass of Oktoberfest. In addition to the standard 16 oz. shaker pint, and the festival 32 oz. Maas, this year the brewery offered a 20 oz. "tall pint" souvenir glass too. That'll do. :-) The dark copper colored Oktoberfest had a rich caramel malt base with a mildly bitter finish. We next headed to the food tent for the solid portion of lunch, both opting for Bratwurst, mine mit kraut, and a side of German potato salad. The brat was quite tasty. They had a wide selection of sausage dishes available and they looked very good as well. The food at the festival has certainly improved with the opening of the Lee's Retreat brewpub.

I ran into Jimbo, who's one of the longtime brewers at Blue & Gray, and he suggested I try the Kölsch. Well, Kirkland's Kölsch may just be my new favorite beer at Blue & Gray Brewery. Brewer David Achkio did this one right! The beer poured a clear golden color, with no head to speak of. The aroma was very faint bready malt. The beer shines in the drinking. A clean bready flavor followed by a crisp bitterness in the finish. For me it was that pleasing mild, lingering bitterness in the finish that won me over. The beer probably checks in at around 5 - 5 1/2%, not quite a "session beer," but certainly sessionable. Given I was drinking from a 20 oz. glass, and was planning an evening out with my son for 'wings' and possibly a few more beers (for me) I stopped at one Kölsch, but I do know I'll be going back to the brewpub later this week.

We hung around for a few hours, enjoying the activities. The stein holding contests and beer barrel bowling were entertaining. It was fun also to visit with some friends. The basketball team at my son's high school was also selling water and brownies as a fund raiser so he saw some classmates as well. It was a fun afternoon spent with my son, enjoying friends, food, and good drink.