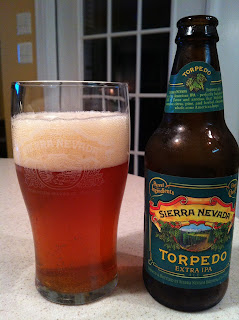 Last week I shared my thoughts on that quite enjoyable glass cup of Sierra Nevada Torpedo Extra IPA I had after a weekend of shooting. This weekend I revisited the beer, solely because I felt I owed you all a proper review. (That's my story and I'm sticking to it.) This time, instead of the plastic cup, I dug out a proper etched Sierra Nevada glass.

Sierra Nevada Torpedo Extra IPA pours a clear, dark orange color with a big frothy white head. The aroma is fresh, but modest; mostly caramel malt with a hint of citrus. There's nothing modest about the flavor though. This is a beer that gives me the flavors I look for in an IPA. The flavor starts out with strong, pithy citrus notes. Resinous piney hops come through as well. Sierra Nevada uses whole hop cones to dry hop the beer, adding a fresh, grassy hop profile. The finish is very dry with a lingering bitterness.

As noted previously, the selection at the store where I picked this up was pretty slim, mostly the typical BudMillerCoors factory beers. One of the things I like about Sierra Nevada Torpedo, besides the taste, is that it's readily available. It's a flavorful and assertive beer that you don't have to search far and wide to find.

Sierra Nevada beers are ubiquitous in many places. Sometimes familiarity causes us to overlook a beer. I've enjoyed Torpedo in the past, it's been a year-round beer for about four years. But frankly, if the store had stocked a large selection of other "craft" beers, I may have overlooked it. I'm glad I didn't.