I made it out for the Wednesday IDPA style match at The Range this week. As usual, four fun stages were set up for a quick mid-week diversion.

The first stage had 6 targets which were to have one shot on each target in the specified order. After all targets were engaged, we were then to go back and put 2 more hits on each. They called it "boarding house" rules; everybody gets served before anyone gets seconds. I was placed first in the shooting order for each stage, which didn't bother me at all, even if it meant not seeing the stage shot by someone else first. Unfortunately, I ended up shooting the targets out of order, getting confused midway through, and earning a procedural penalty plus a whopping 11 points down.

The next stage required 3 hits on each of three targets while retreating to cover. Then, from behind cover a head shot on each target. Apparently I made my three head shots out of "tactical sequence," earning yet another procedural, but was just 1 point down otherwise. Okay, it's time to get into the IDPA mindset!

Stage 3 had three targets that were to be engaged from behind cover. First, 2 shots on each target strong hand only, followed by a mandatory reload with retention, then 2 shots on each target weak hand only. I joked with the RO that the way it's been going I just might drop my magazine on the ground out of habit and earn another procedural. However I didn't do that, and finished just 5 points down on the stage.

The last stage was most interesting and a lot of fun. There were five targets in a staggered "V," to be engaged in tactical sequence. The requirement was to "neutralize" each target with either one 0 down hit or two -1 hits. Any hits further out than the 1 down zone didn't count. The score for each target would be either 0 down, or a miss for 5 down. But there was a twist — the lights in the range were turned off. There was a bit of ambient light at the shooting position, enough to make out the sights, and the backstop was lit. The targets were all in shadow. I knew I wouldn't be able to see the hits on the targets, so I had to be sure to call my shots to avoid any unnecessary makeup rounds. I made my five shots, and felt confident in all of them, so took no extras. In the end, all 5 were down 0 hits! Perhaps the practice this weekend calling my shots paid off. In any event it was an uplifting way to end the match.

Despite the 2 procedurals and too many points down, especially on the first stage, I ended up 4th out of 14. In reviewing the results for each stage, it looks like I made up for the points dropped with pretty decent times. It was a good match. I learned a little bit more about shooting IDPA and got validation on some of the things I've been practicing. Plus we're now past the mid-week hump! 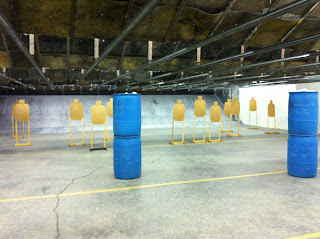