Our dishwasher is broken, so being a thoughtful husband, I felt I should lend a helping hand on the dishes, or, we could go out to eat. Tuesday happened to be "Steal the Glass" Night at Capital Ale House, featuring Breckenridge Brewery, so...

Two beers were featured this evening, 72 Imperial Chocolate Cream Stout and 471 Small Batch IPA. Each beer came in its own glass; the Stout in a logo shaker pint, and the IPA in and attractively etched snifter. I started off with the IPA, while Colleen kicked off the evening with the Stout. 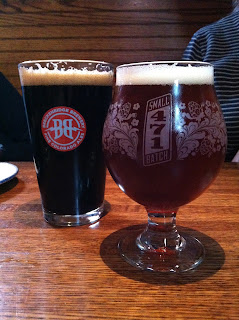 The Breckenridge pub was a regular stop for me when I was traveling to Denver on business, and I've enjoyed many a pint of the Small Batch IPA, although I seem to recall it being served in a full "pint" rather than the 10 oz snifter. The beer is technically an Imperial, or Double, IPA. Checking in at 9.2% ABV, the beer is full of rich malt, and pine and citrus hops. At the opposite end of the flavor spectrum, the Imperial Chocolate Cream Stout was quite tasty as well. This flavor is am enjoyable balance of coffee and dark chocolate without bitterness. The 7.2% ABV earns it the "imperial" designation, but the alcohol is well-hidden in a smooth and creamy beer.

We enjoyed our beers with an appetizer of smoked salmon and hash brown potato cakes drizzled with dill sauce, from CAH's special St. Patrick week menu. All of us, our son included, remarked we could have each enjoyed ordering that dish as our main course. Instead, we ordered another round of beers and our entrées. This time we each chose the "other" beer; after all we needed a matched set of glasses!

For the main course, two of us had seared flat iron steak marinated in a Guinness and malt sauce, served with a spinach soufflé and potatoes. It was quite tasty, and I found it went quite well with the Imperial Chocolate Cream Stout. Our son enjoyed a classic cheeseburger, with Capital Ale House's frites.

All in all, it was a enjoyable and tasty dinner, and as Colleen noted, "No dishes!"