This doesn't seem to getting any coverage in the media.

The recipients will first commemorate Medal of Honor Day, on the 150th anniversary of the Medal’s first presentation, with a wreath-laying at 2:00 at the Tomb of the Unknowns. The recipients will then present the Citizen Service Before Self Honors (CSBSH) awards at 2:30 to four honorees selected from a nationwide campaign for going above and beyond for their fellow man. 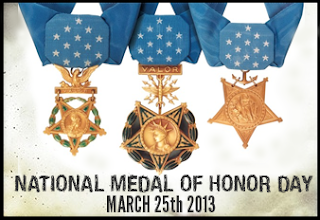 The Medal of Honor was first awarded on March 25, 1863 to 6 Union soldiers for their actions in the "The Great Locomotive Chase."