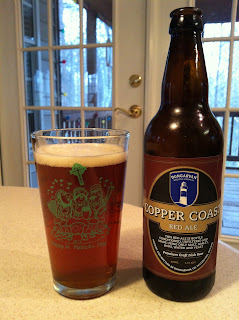 While waiting for our traditional St. Patrick's Day meal of corned beef and cabbage to cook, we decided to open a bottle of an authentic Irish Red Ale; the Dungarvan Copper Coast Red Ale I had recently received.

Dungarvan beers are unfiltered and bottle conditioned, as God intended, and that was readily apparent in the bottle. There was a copious yeast remnant both at the bottom and around the rim of the bottle. I poured the beer into a couple of St. Patrick's Day glasses from the previous day's Blue & Gray Brewery festivities. The beer pours with a thin head over a cloudy, dark copper base. A moderately strong aroma of yeasty malt was quick to arise. The flavors of caramel and biscuit, and lightly toasted malts make up the taste. A bit of bitter hops comes in the finish. This is a very well-balanced Red Ale, and I lamented my supply was limited to the one bottle.

We broke out a chunk of Kerrygold Aged Cheddar to enjoy with the beer. The sharpness of the cheese paired very well with the toasted and bitter flavors of the beer. Alas, my glass was emptied much to soon. Even though I was watching the snow fall outside, I was transported back to that warm afternoon in Ireland when I was first introduced to Dungarvan Irish Red Ale.