Though you'd never know it from the temperature, or this, Spring is apparently at hand. I know because the Fredericksburg Practical Shooters put on their first USPSA match of 2013 this weekend. And, if that match was any indication, it's going to be a great year!

I helped with setting up the match on Saturday, even though at the time I had some doubts I'd actually shoot it, the expected duration of the match conflicting with other commitments on Sunday evening. However, once I saw the cool challenges to Match Director had devised, I knew I had to work it out. (My apologies to family and friends for the late dinner date Sunday.)

Sunday morning was quite cool, and the temps were barely above freezing by the time we got started shooting. I laughed when I went to paste a hole in a target and my hands were shaking so bad I missed the hole with the sticker. I hoped that wasn't a sign of the shooting to come!

The match consisted of 7 field courses, a speed stage, and a classifier. All the stages were fun and a few I found especially intriguing. Stage 2, "Bookends," began with the shooter hanging with one hand from a bar while leaning far around a wall to engage targets shooting one-handed. The course of fire ended in a similar position, using opposite hand. The start, for this right-handed shooter, involved drawing the gun, transferring the gun to my left hand, grabbing the bar with my right hand, engaging three targets, transferring the gun back to my right hand, performing a reload, then moving to engage the next target array. I spent a lot of my walk-through time just rehearsing that portion of the course. Some "gamers" (which is perfectly legit in USPA) realized they could lean thru a gap in the walls and hit the last array without being forced to use the one-handed hang. I opted for the more fun way that the course designer had intended. 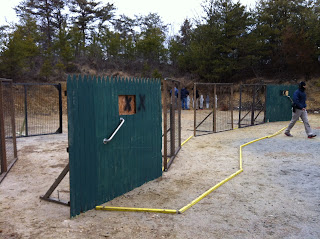 Stage 3, "Hit 'em High," was a typical field course with all the targets lined up along the berm and visible from multiple gaps between the wall sections. What was interesting was all the paper targets had no-shoots covering their lower portions, the two steel plates had no-shoots below them, and the falling popper had hard-cover steel in front. This forced me to pay close attention to the front sight. I did not hit any no-shoots and actually claimed a third place finish on this stage, my best of the match. 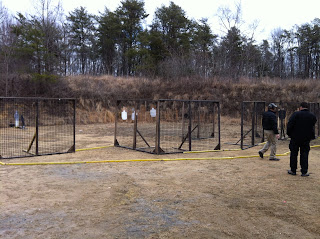 Stage 6, "Rock 'n Roll," had a pair of moving targets that rolled down an incline after being activated by shooting a falling popper. I've shot swinging and turning targets in matches, but never a target that was "running." It was a lot of fun, and if I recall correctly I scored 3 A's and 1 C one that pair. 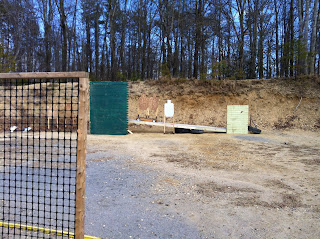 There was falling steel and several swinging targets throughout the match, as well as quite a few no-shoot targets strategically placed. It was fun to finally get out and shoot a match, my first since October. I had a range of finishes on the stages, doing well on some, and not as well on others. I had a strong start but fell in the second half, due mostly, I suspect, to getting complacent and not paying as good attention as I should to that bump on the front of the gun. I was also admittedly distracted by the late hour and the need to get away to my other committment. However, overall I was pleased with my shooting, and I had a great time. It was also fun to shoot with friends I hadn't seen in a while.

It was a long, and tiring day. I arrived at the range around 8:00 AM, the match started at 9:00, and I finally headed for home a little before 5:00PM. I've spent the winter months working on dry fire and movement, but I realized Sunday evening that I may need to better prepare myself for standing for 8-9 hours too! Despite the aching muscles, I'm looking forward to next month! Given the current ammo shortage, and ridiculous prices, I suspect the majority of my live-fire practice will be in the context of matches, rather than standing on the practice range.