We headed over to Red Drum Tap House for dinner one evening while in the Outer Banks. I like this stop as they have a decent selection of North Carolina beers AND a seafood menu. Upon entering I noticed one of the specials was a Crab Cake platter, so my main course selection was made before I sat down. Now to get down to the beer selection.

I opted to start out with Hoppyum IPA from Foothills Brewing Company. We were starting our meal with the spicy Taphouse Wings, and I figured the hoppy beer should be a good match for the spicy appetizer. I could tell right away from the strong citrus aroma that I had made a good choice. The flavor was bitter and resinous, and full of citrus juiciness. Quite frankly, it was my kind of beer. And indeed, it was a good foil to the spicy hot wings.

I finished my glass of beer about the time the main course arrived. I decided to go with Freedom IPA by Natty Greene's Brewing Company to accompany the crab cakes. Another bold American-style IPA, this beer was noticeably different than the previous beer. The citrusy hops were balanced by a hint of sweetness. The sweet malt mitigated the citrus, but did not hide it. My crab cakes were accompanied by a Aioli sauce and the beer made a nice pairing with the garlicky and tart sauce. I enjoyed both of the IPAs very much. They each went especially well with the accompanying foods.

Red Drum is decorated with a lot breweriana. The bar also has a mixed and varied glassware collection, and it's interesting to see what brewery's logo accompanies the beer, such as this National Bohemian glass from a previous trip. This visit, my Hoppyum IPA was served in a thick-walled Dos Equis glass. The Natty Greene's beer came in the usual shaker pint, but with a Sweetwater 420 Pale Ale logo. No glass snobs here, drinking a beer at Red Drum, with its eclectic glass collection, reminds me of drinking at my own home. 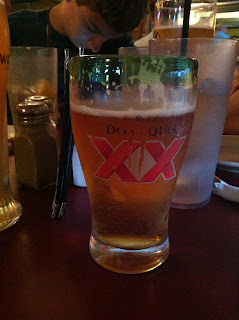