This Thursday saw another tap takeover at Capital Ale House in Fredericksburg. New Belgium Brewing Company was the featured brewery this week. As I read the descriptions of the six beers I was struck by the out-of-the-ordinary selections. Usually I'll pick one or two beers to enjoy at such an event. However this time, I was truly curious about all of these unusual offerings, and couldn't settle on one that tempted me the most. Five of the beers were also limited or one-time releases, which made the decision all that much harder. So I opted for a flight — six, 4 oz pours of each. 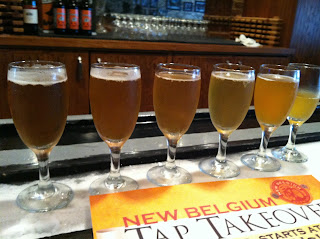 The beers were enjoyed from right to left in the above photo. First up was Coconut Curry Hefeweizen. This was a very interesting, 8% ABV beer. There was a hint of coconut in both the aroma and in the finish. It's mild and not a prominent flavor. The beer was slightly sweet malt with a noticeable alcohol presence. Too be honest, this was the one beer on the list that I was tempted to pass by. It turns out to be one that I enjoyed quite a bit.

Next up was Paardebloem Belgian Ale. This Belgian Strong Pale Ale is fermented with wild Belgian yeast and has dandelion greens in the recipe. It checks in at 9% ABV. The beer is noticeably dry with some sweetness and a bit of woody, funky yeast. Paardebloem was the option I had been tempted to order if I had opted to go the single beer route, and it turns out I enjoyed it a lot.

I was eager to get to the next beer, Yuzu Imperial Berliner Weisse. This beer is listed at 8% ABV. That's high for the style, hence the "Imperial" appellation. The flavor was fairly mild and not nearly as tart as had I expected. It was tasty but I had been looking for a more traditional Berliner Weisse.

Pluot Fruit Beer is a Tripel brewed with wild Belgian yeast and features the pluot fruit; a hybrid of apricot and plums. The beer was quite mildly flavored, fruity, sweet, and, well, that's about it. This one frankly did nothing for me. At 10% ABV, the beer offered me nothing in the flavor to make it worth the alcohol consumption. I left about half my 4 ounce sample unfinished.

Two IPA's rounded out the menu, and these beers were quite different despite sharing a style designation. French Aramis IPA features a relatively new hop from Alsace, France. The beer is quite floral and earthy in both aroma and flavor, with a creamy mouthfeel. I struggled as I sipped, trying to come up with a way to describe the unique flavor. There's an herbal "green" aspect, a bit like a tea. At one point I had a flash of smoking a clove cigarette, but that's not quite it either. Hard to describe, but I enjoyed very much.

My session ended with Rampant Imperial IPA, the most "usual" of the beers, and the only regularly brewed beer of the group. Citrusy and piney, but not overly aggressive. The finish is dry and leaves a sweet malt lingering in the finish. It was a good finale to the flight.

All too soon it was time to leave to meet family and friends for dinner. Had I had the time, I think I could have finally made a decision and picked a beer or two to enjoy as a full pint serving. I think that pick would be the Paardebloem Belgian Ale. Or maybe the French Aramis IPA. No, I think the Coconut Hefeweizen. Aw heck, I'm glad I went with the full flight!